Is Marple an Aldi, or a Waitrose, kind of place?

Stockport Council is pressing ahead with plans to develop Chadwick Street car park in the centre of Marple. Kirkland Developments is in pole position and is in partnership with a retailer.

It throws quite a cog into Asda's plans for developing a large store on the site of the Sixth Form College on Hibbert Lane. All their calculations on demand and consumer need will need reforecasting. Asda may be used to getting their own way, and may still do so.

But where does any of this leave the balance of Marple's shopping offer? What effect will this development have on the butchers, the bakers and the other local shops?

I notice a few more subtle changes to the retail make up now that I work here a few days a week. There's a new newsagent and sandwich bar planned on Stockport Road opposite Costa Coffee. The likely occupier of the old HSBC unit is Domino's Pizza. The new American sweet shop Stars and Stripes has gone down an absolute storm during the kids holidays - I wish them well and hope they don't refer too much trade to the business next door - the dentists. My favourite new addition to the centre has been the dog grooming shop on the corner of Hollins Lane. 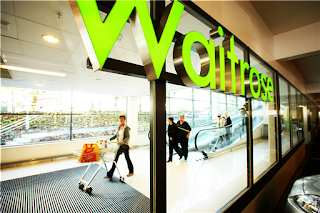 Like it or not, the brands in an area say something about the sense of place and start to determine which other retail brands will gravitate to a location, but as much as I'd like a bustling cluster of independents, there is a remorseless march of the multiples.

So who arrives in Chadwick Street will have a huge bearing on the character of Marple.

Waitrose are on a massive expansion drive and have opened in Alderley Edge, Poynton and Cheadle Hulme recently. I'm pretty sure many Marple people like to think of their home on the same par as these places.

But what of the other likely expansive retail player on the prowl at the moment, Aldi? What if Aldi were to add to their successful stores in Hyde, Hazel Grove and Romiley with a new store in Marple? I shop at Aldi and often fill a trolley at the Hazel Grove store for about £30, then spend the same amount again on a basket at M&S Food next door. 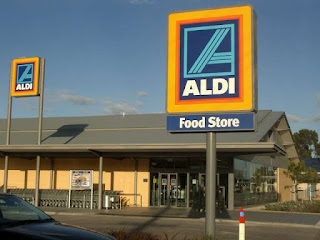 I enjoy the savings, but can't say I enjoy the experience. It's pretty stark and functional and OK for the basics. But here's the deal, there's a market for this kind of thing in Marple. The Co-op is expensive, the local shops can't offer the range. The German discount retailer would go down a storm with a large part of the population. But would signal a huge move in the identity and direction of what Marple represents.

The future of the centre is becoming a sideshow while so much attention, rightly, is looking intently at the dastardly deeds of the College and their sneaky deal with Asda.

The question is, what kind of place is Marple? The one we are, the one we had, or the one we wish we could be, but aren't? I honestly don't know.
Posted by Michael Taylor at 8:46 pm

A Tesco metro/express would fit the site nicely and provide for both markets with its value range and finest ranges. Also unlike the CoOp they are good at stock control.

We like to think we're a Waitrose kind of town.... but we'd all be in the Aldi buying tinned toms and german ham.

I too love the dog grooming parlour as it has been so nicely done. Let's hope they are successful. As much as I love the co-op I would be delighted to also see a Waitrose, not only because of the quality of the product but they do also seem to care about the local community too and let's be honest Marple deserves a mix of retail.

I believe that Kirklands last town centre development was in Middleton where they produced an Aldi. This would suit me although I accept that it would be frowned upon by those who regard Marple as some bucolic Elysian Field ("in groves we live and lie on mossy beds by crystal streams that mumur thro' the meads")rather than the suburban dormitory that it now is.

if were referring to kirklands being bowmer and kirkland theyre developing howard town mill in glossop and have done an m&s food massive delopment but really poor access off victoria street. it will be interesting to see if they widen the access roads in marple to cope with the extra traffic.

most big shops offer about 3 levels of shopping
1 named brands
2 store brand
3 cheap
most aldis i have been in only offer 2 levels 2 and 3
the cheap level in aldi and asda are very close in price but it doesnt seem people want to be seen with a trolley full of cheap store goods
aldi dont offer choice maybee 2 where larger stores offer considerbly more 40,000 lines to aldis 2000
they advertise how cheap there shopping basket is to premium brands at other stores they dont seel the same amount of premium brands as other store

The change from the present Cooperative store to Asda is disappointing
Product quality and choice will suffer as evidenced by other Asda stores in Greater Manchester.
Great pity and I suspect Asda have made a major error - time will tell.