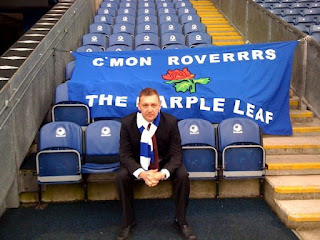 Here I am, pictured, surrounded by empty seats at Ewood Park, home of the club I have loved since I was 11 years old. Obviously I'm not qualified to sit in that particular seat, but...
I didn't go much last season - three times in fact - I managed more than that in 1988-1989 when I lived in Australia from September. Last season's stayaway wasn't a boycott as such, partly it was because of the toxic atmosphere that the angry fans had created, but frankly, I just wasn't enjoying it anymore. Now, it's more straightforward. I refuse to give the club a penny of my money while Venky's are in charge.

I'm not a glory hunter, who will only go to Premier League games. My first season as a regular was 1977-1978 and Rovers were a mid-table Second Division side with an average crowd of about 7,000. We were in the same division as Blackpool, Burnley and Bolton. Preston were in the division below. I chose this. I made a conscious decision to support a local team instead of Manchester United, Leeds or Liverpool. All the good times were a bonus, an unexpected gift from a rich fan who helped this club do great things. Without him, well, we'd be in the Second Division, on a level with the rest of our Lancashire rivals. So no, I'm a realist and I'm not a spoilt child, but what the Venky's are doing is as poor a job at running down an institution as football has ever seen.

There is hardly anything worth saying on the subject, because there is nothing they can do to change my mind. Even if they do things which on the surface seem like good moves.

Signing new players It may well be that by chucking a few quid at the squad that Venky's believe they can get back up. Some of the signings seem OK, but my heart and head says they have absolutely no chance. Steve Kean's record speaks for itself.

Communicating better The connection to the fans was lost a long time ago, gimmicks and stunts have backfired, I have never rated Paul Agnew either as a PR man, or anyway capable of running the club. This new director of football, Shebby Singh, came across as a bumbling buffoon on TalkSport. The reaction from the manager that his comments at a Fan's Forum were "disruptive" was further evidence of how manipulative Kean is with the media and how he engineers every situation for his advantage. Always the victim, never his fault.

Colin Hendry The recruitment of Colin Hendry as a coach is far more complex than a hero returning, in fact it's as tangled as Hendry's financial affairs.

Winning games Last night was the first home game of the season. And it had the lowest crowd since 1993 when Ewood was a building site. I had no excuse for not going, and I missed being there and I was glad they won, in fact, I hope they win all the matches at Ewood. If anything I'm quite looking forward to an away game soon - though I couldn't possibly take this moral high ground and go to the next one - MK Dons away!

Sacking Steve Kean This seems unlikely, but it is their ace card. The fans have worked themselves up into a frenzy on this issue and his sacking would make them happy, but he's not the problem. I want them to go, and take him with them.

Lack of performance on the pitch hasn't persuaded Venky's to give it all up, but lack of corporate, sponsor and commercial support will hit them where it hurts. That, and the sight of all those empty seats.

Posted by Michael Taylor at 2:34 pm

Since day 1 I've always said that the Venkys are only in it to promote their own brand. Any press (good or bad) is promoting them. They are not interested in the club at all - or we would have a good sponsor and sponsors knocking on our door.

The reality is; Kean's sacking will bring fans back to an extent - but will these clueless owners start to run the club like it should be run? I doubt that too! Until they leave I wont step foot in the ground again!

Agree with your sentiments and your despair, Michael, at what has happened to our football club. My own allegiance goes back over 50 years but I cannot bring myself to support the present, disreputable regime in any way. All we can hope for is that it will all change, sooner rather than later, as things eventually do in football. I recall seeing Rovers at Stamford Bridge in the early '80s when there were fewer than 7,000 present, and it really isn't long since Man City were a joke club.

In the meantime, like you, I'll try for the odd away trip and new ground to keep the flames kindling, but they won't be burning while these arrogant clowns are in charge.

I share your sentiments and your despair, Michael. My own allegiance to Rovers goes back over 50 years and it is hard to believe the shambles our club has become in such a short time. Like you I cannot bring myself to support the current, disreputable regime in any shape or form. To keep the fire kindling (the flame will not be burning again until they are gone), like you I will get to the odd away match.
One ray of hope perhaps is that, in football, nothing lasts forever. In the early 80s I watched Rovers at Stamford Bridge in a crowd of less that 7,000 and it's a very short time since Man City were perceived as some sort of a joke club. Sooner rather than later, I hope, Rovers will be under new owners, and will be a club worthy of our support once again.