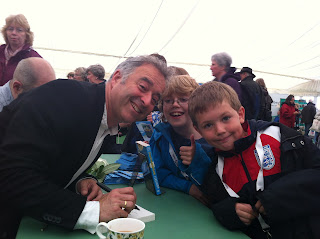 The awesome Olympic ceremony was a spectacle made and conceived by two proud sons of the North West, Danny Boyle and his mate Frank Cottrell Boyce, the writer. Frank has written an incredibly warm and wonderful account of his Olympic opening ceremony adventure and how he kept it all a secret for the last couple of weeks.

We went to the Hay Festival in June and met with Frank, firstly because after we watched his talk we queued up to get a book signed (pictured). Our kids love his writing and his sense of humour. I thought he did an amazing job of 24 Hour Party People - remember, "faced with the truth and the legend, always print the legend." And of course he was part of the team on Brookside when it was good. Personally, I love how he also articulates his Catholic faith in such a profound way. Not easy, not comforting, but almost ... obvious.

We then bumped into him again at Hay and stopped for a chat. He was even more lovely and impressive in person than I possibly imagined him to be. I asked him if he'd do a couple of things for projects I'm involved in. Long story short, he's agreed to.

To see the universal acclaim for the opening ceremony makes me so proud of our tolerant and creative country and the embrace of a loving and diverse population. Even the nasty wing of the Guardian and Daily Mail and the keyboard warriors trying to be sage just reinforce the core of what Danny Boyle and Frank were pointing out. It was a piece of audacious, obvious, courageous genius. So do read the link, but if you can't be bothered, then my highlight is this:

"As Danny wrote in his introduction to the brochure: "We can build Jerusalem, and it will be for everyone." He'll hate me for saying this but he has a very Catholic sense that yes, this is a fallen world, but you can find grace and beauty in its darkest corners – even if you chop off your arm to do so."
Posted by Michael Taylor at 10:25 pm