The death of The Word magazine 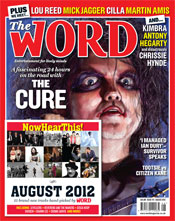 It's sad when a magazine closes. All of the effort and emotional commitment coming to an end. It seems especially sad when the publication is well loved, but not by quite enough people. And so it was with The Word magazine, the August issue will be the last.

I've been a subscriber for six years and have found something to enjoy in each issue. The circulation at the back end of 2010 was 25,000, a new iPad edition had just been released and the podcasts were a regular delight. Their strapline, a friendly American accent pronouncing "The Word, a magazine, a podcast, a way of life" was an accurate depiction of a brand extension. Indeed, their foray into live events attracted fierce loyalty from "the Word massive" and the True Stories Told Live evenings were fully subscribed.

The news of the demise is covered on the BBC and Media Guardian and follows the line that the falling circulation made it a difficult business to sustain. Declining circulation for a print title is nothing new. Yet I rather suspect something else forced the issue at this moment in time.

First, all magazines make money from advertising and copy sales. The Word's advertising team seemed to consist of one person. But a metropolitan readership with higher than average discretionary income should be able to attract higher spending advertisers in greater numbers than they did. The problem seemed to be a sales strategy built on the content of the magazine - festivals, CDs and books. That worked very well in the era of "Fifty Quid Bloke" the demographic which the founders identified back in 2001. But successful consumer magazines also feature adverts for products that the readers will like irrespective of whether they are written about. There was rarely a sponsor for the podcast, which amazed me. At a time when a lot of brands do get the importance of Long Tail marketing, there are worse parts of the long tail to own than a hub of middle class culture vultures.

Second, the founders and popular talismen for the title, publisher David Hepworth and editor Mark Ellen, always contributed the better features in the magazine, but my feeling was they've lost their love of new music. The things they contributed to Radio 4 about and wrote about on blogs expose such a rich hinterland, I suspect this is where their love lies. There is only so much you can write about music after a lifetime of doing just that. The best of the rest of the features in The Word were always the non-music ones to my mind, or Eamonn Forde's epic rants about the changing economics of the industry, and it became the strength of the magazine and what provided regular moments of serendipity.

Thirdly, owner Development Hell is a lean business but has experienced media industry investors like Chris Oakley. Like David Hepworth, he has sharp antennae for what is going on and what needs to be done, and a rather gloomy view of print media's future. The trouble was, they didn't have the energy to do what they know needs to be done to do it properly. What surprises me is there isn't at least a plan to take The Word online only. Maybe it's an experiment in human nature to see how self sustaining the Massive can be. Which I suppose takes me back to the first two points.

I'll miss it hugely and hope that the incredible array of talent involved in its production and writing will find a place somewhere else. I note with some interest that Andrew Harrison, formerly of this parish is brightening up Q magazine these days.
Posted by Michael Taylor at 4:34 pm

The thing I loved most about the Word was the way they managed to give a voice to the bit players, most of whom seemed to have all the best stories. The podcasts with Guy Pratt and Nile Rogers were some of the best broadcasts I've ever heard but there's only so many of us that really care about the Mile Melters and there are only so many stories to tell.

I loved the podcasts. They created some truly great radio moments. I have read somewhere that they didn't know how many people listened to them.