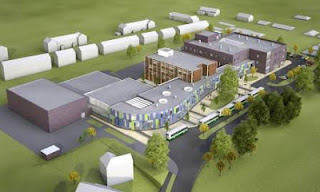 Asda have unveiled their plans for a supermarket on Hibbert Lane in Marple on the site of the sixth form college. The exhibition of the plans mainly highlight that the sale of the site will enable the construction of a new college on Buxton Lane just around the corner (pictured).

My first thought when I saw the leaflet was, oh , that looks alright. Then you read it with a more sceptical eye and it adds up to the same thing you always feared, a dirty great supermarket close enough to a town centre to threaten it, not close enough to complement the offer. As a piece of public affairs lobbying it contains all the depressing hallmarks of a slick corporate operation ticking all the right boxes and using buzz words like "community". A series of leading questions at the back of the leaflet make it seem like they're going to solve all the problems of traffic, sick children, sports provision, education and cheap food. You can read a well argued destruction of all this sophistry on the Marple in Action website.

There is no doubt that things will change forever round here. A developer has also purchased a car park site in the centre of Marple with a view to another supermarket opening closer to the centre and within the retail core, while the Asda plan is outside of it. It is more likely than not to be Waitrose.

There are plenty of empty shops in Marple, and a few really crummy businesses which lower the bar of expectation. But what is the centre for? What more can do done to add to the attraction of the place and sell stuff that people actually want. Allowing an Asda to come in, where their customers won't touch the rest of Marple's other stores will be a disaster.
Posted by Michael Taylor at 8:15 am

I think whats happening on Burton Road in West Didsbury is a good model. A mix of Bars, Restaurants and some niche retail. Virtually all the shops are occupied.

Its a great mix and has brought a fantastic vibe and community spirt to the area.

Personally, I believe a (larger) ASDA and a (smaller) Waitrose will be an excellent combination for Marple. Obviously, the Co-op will be a casualty but that will be no great loss IMHO. The good local shops will survive, the poorer ones will go out of business. On a personal level I have lived in Marple for 11 years and the only two shops I seem to frequent are the Co-op ( when I have to) and Hollins (which is excellent).

Personally, I believe a (larger) ASDA and a (smaller) Waitrose will be an excellent combination for Marple. Obviously, the Co-op will be a casualty but that will be no great loss IMHO. The good local shops will survive, the poorer ones will go out of business. On a personal level I have lived in Marple for 11 years and the only two shops I seem to frequent are the Co-op ( when I have to) and Hollins (which is excellent).

I see the Darwinian aspect at work here, but fear that many good shops will also suffer.

I have said all along, it's a massive opportunity for EVERYONE to have a grown up conversation about what kind of place Marple is. Maybe it's not as "special" as we think and you thus tend to get the shops and services you deserve.

It is about time we had a decent shop in marple, and a new college, whats all the fuss about, the people who are against it will keep the other shops going,

I guess co-op is going to have a big competitor now so the prices will go down.

According to college, it won't be much disturbance...
http://marplecollegeandasda.co.uk/#/

apparently the disturbance will be kept to minimum http://marplecollegeandasda.co.uk/#/

Marple - as Hazel Grove has experience of also is not built for Supermarket scale traffic. http://menmedia.co.uk/manchestereveningnews/news/s/1457628_asda-truck-delivers-unwanted-jam-after-getting-stuck-on-hazel-grove-street

linda
The main shopping centre would suffer with a large supermarket on the outskirts , and would impact on residential living . A smaller supermarket would be helpful but lets be realistic not a waitrose lets invite ALDI more affordable for everybody , and they will not cut into the local well established shops but will encourage more foot fall . And make the co op work a little harder for the local community. ALDI has no coffee shop and sells good basics at fab prices with really good offers.So NO TO ASDA AND NO TO ANY OTHER BUT LETS WELCOME ALDI.