A month off blogging to get my head straight 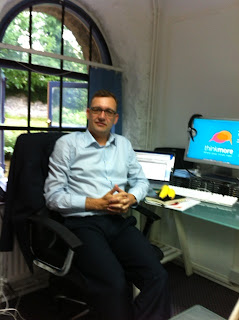 Hello - and greetings from my new office at Lockside Mill in Marple.

I have really enjoyed doing this blog over the last few years. It's been a useful and valuable release to comment and pontificate on things of importance to me. But since I started Think More at the start of the month, I've left the Marple Leaf alone in order to work out what it's for and what I should include on here.

Well, I've got a different set of priorities now. I always said, this blog isn't about work, it's about the other stuff. That's slightly changed now, as so much is now so integrated into everything else.


Even though I never updated this blog during office hours at Insider - access to Blogger is banned, along with Facebook and Friends Reunited - running my own business absorbs all that extra capacity in the evenings and weekends, as does having five kids.

But I am going to carry on with it and include relevant content. This is what this post is about.


The most popular topics on the blog are Blackburn Rovers, Marple and Manchester. The other subjects I like to drop in here are shameless namedropping, daft lists, cultural observations and something of an archive for concerts we go to, books I read, friends we share time with, and a few things about TV programmes.

All of them have changed their role in my life to varying degrees.

Firstly, I am totally fed up with Blackburn Rovers and will not be setting foot inside Ewood Park while Venky's are in charge. I despair of what has happened and cannot think of another way of expressing my disgust. I will go to away games occasionally, as I still support my team. There will be occasional blogs and I will be changing the inscription at the top of this blog's flag to something that captures my stubborn hostility to Venky's and yet the love for what still might be. However, what I will say is this: as I am now involved in a business with Ian Currie, who has tabled a bid to buy the club, I will be very careful on what I say and be mindful of how that will be interpreted. We'll see. Just don't expect any leaks.

Secondly, Marple, the small town where I live, is on a real knife edge at the moment. The Portas bid is in. The pre-planning consultation process on Asda's plan for a new supermarket on Hibbert Lane is well underway. Shops are starting up and closing down, local facilities are in need of upgrade. I will be blogging on all of this regularly. The added spice is I'm also working from Lockside Mill, an amazing business premises in Marple.

Now that I'm no longer working in frontline journalism I also have an opportunity to say a few more things about where the media is going, especially on some of the deeper issues around morality and commerciality. I've backed off previously for fear of my comments being made into a story on How Do. That said, I'm gutted that The Word magazine has folded and that has upset my thinking somewhat.


Fourthly, I've also taken on a new role as chairman of Downtown Manchester in Business, a fantastic business lobbying group that exists to channel private sector views on the development of the city and broker connections between members for new business relationships. I'll link to Taking the Michael, my weekly chairman's blog which will focus on many of the subjects about my favourite city.


Finally, there's the guiding mission of my new business Think More. It is this: to get the people of the North to think more, to take part in debates that are shaping our lives, through the forum of live events that stimulate and inspire. There will be blog content on that site which serves that purpose.

Delighted to see that you will continue to comment on BRFC Michael (amongst other worthy causes). Don't stop the "fight" and of course good luck with the new venture. Best Greg