Yes we know the way to San Jose 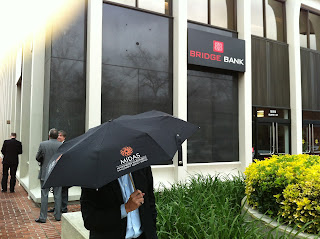 The team answered in the affirmative the question posed by Burt Bacharach and Dionne Warwick as we found our way to San Jose to meet Dan Harden of Whipsaw.

It was a damp and rainy day in the Valley, but our spirits were good and we all enjoyed another amazing day.

Whipsaw is a product design company that though small and perfectly formed – just 35 employees – it works on making a wide range of products that users will find lovableand tactile. “There can be glory in anything you can design,” is Dan's philosophy. It was this passion, his love of design that shone through everything he told the group in an illuminating and inspiringsession, but it was also what led him out of Frog Design in 1999 which had got too big, he felt.

Whipsaw is a funky name, he says that's essential in the Valley – a real dynamic intellectual environment – but it also embodies the team ethic –you need two people to pull a whipsaw from side to side.

He was remarkably candid about some of the ways he's worked with clients – even the ones he's been in dispute with – but he was tight lipped on what he's been doing for Google – that G is shaped like a noose for a reason.

But that Valley commitment to excellence has also driven him to embrace the social craft of what they can bring to a business. The world needs to improve so many everyday experiences – the flights we took to get here, driving, even hospital visits. Whipsaw even admitted an intern into hospital to observe the patient experience.

But the group were mesmerised by his retelling of his four experiences with the late great Steve Jobs. He sparked with energy and passion, it's not a surprise that he remains so hand's on in the business, clients want him involved in their projects.

Next stop for nourishment - both mental and gastronomic - was DPR Construction in Redwood City.

You don't get to the exalted heights of 13th in the Fortune magazine ranking of the Best Companies to Work For by accident. You have to embed excellence into your organisation and be prepared to fire high performers who are jerks. That's what we learned at DPR Construction, a company that takes seriously the wider message of Thomas Jefferson's Declaration of Rights and the true value of life, liberty and the pursuit of happiness. This is all vital to understand how the company was formed and the ethics of the founders.

We were here to learn about the company from founder Pete Nosler and of this commitment to teamwork and how they are set up, but this is no hippy colony – DPR work on huge schemes for major customers and work with renowned architects.

But the business also operates at the industry profit margin of a wretched 2 per cent. They manage it, but it's through a large volume of work and through being in control of their projects – they don't do competitive tendering, for example.

But integrity lies at the centre of their world – on time, in full, no second chances. It's folksy, but tough, and a shining beacon deserving of all their glory.

Bridge Bank, our next visit was another stimulating charge. A fair few of the group have bad experiences with their banks – some have kinder words to say about theirs. But for better or for worse none of us have encountered a banker quite like Ed Lambert of Bridge Bank, a key figure in the technology sector in Silicon Valley, who we spent sometime with at his office in Palo Alto.

A tactile and warm hearted individual he embodies the values of the Valley and places a high importance on networks, gut feel, helping others and theValley's secret sauce.

I've never met a banker who manages to quote Roger Daltrey, Voltaire and the Chinese philosophy which decrees that a wise man knows almost everything, but a brilliant man knows everyone. He uses his network to understand the business processes and models of the changing world. He understands the challenges to the banking sector and its diversions into private equity and derivative trading by stressing the importance of a bank's true mission – old world banking in a new world order.

And on the subject ofconnectivity and human understanding he got each of us to tell him who they were – the classic Silicon Valley 2 minute pitch. I don't know whether it was better or worse going next to last; it gave me a lot of time to gather my thoughts, but this incredible group of people are a tough act to follow.
Posted by Michael Taylor at 1:37 am