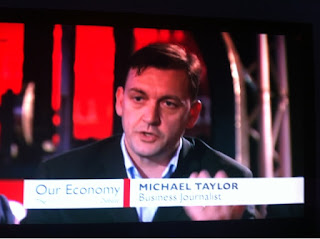 I was chuffed to bits to be invited to a debate on the state of the North West economy which will be broadcast on BBC1 tomorrow night. Ranvir Singh hosted it, there were two MPs there - Hazel Blears for Labour and David Rutley, the Tory member for Macclesfield - and a mixture of business people from a chip shop owner from Woodley to a manufacturer of aircraft  bits. There were unions, the unemployed, an academic and a few good eggs like Max Steinberg and Andy Leach. It was a real whirlwind of a debate, much punchier than the usual polite business events I'm involved in. It was also quite broad. See for yourself tomorrow night at 11. And let me know what you thought. I know which bits I enjoyed the most.
Posted by Michael Taylor at 9:07 pm