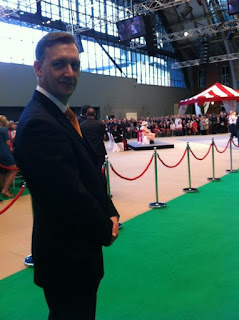 I was delighted to be asked to attend an indoor Mancunian garden party to mark the Queen's visit to Manchester on Friday. There was a fair amount of waiting around, but luckily I ran into Scott Fletcher, (below) who is always good company. We managed to position our selves in a decent spot close to where we reckoned she'd be walking past on her way out.

It must have been a great day for the kids performing dances and martial arts displays. It was a big deal for the city and for Salford to get a visit from the head of state in her Diamond Jubilee year. I have to say that both the Queen and Prince Phillip looked well - they also managed to look like they really enjoyed themselves on such an exhausting schedule. I know we enjoyed the occasion and the Taekwondo was particularly impressive.

Anyway, we sidled up to the red rope as she was due to pass and lined up dutiful subjects should. Sir Richard Leese was doing the duties and had in his hand the details of all the people he wanted to introduce the Queen to, including all the people who'd worked so hard on putting the show on. We certainly weren't on his list, though he nodded at us both with a knowing smile. We took that as a cue to back off a touch and just said hello and smiled at Her Majesty even as she passed right by us. It was a big moment for the team who put the event together and we would have been wrong to muscle in.

But we can say we sort of met the Queen, we said hello at close quarters and she smiled back. And let's face it, I've met Prince Charles, spoken to him, shaken his hand had a conversation about windmills and he'd have as much memory of that as his Mother did of two nodding chancers at Manchester Central.
Posted by Michael Taylor at 6:47 pm