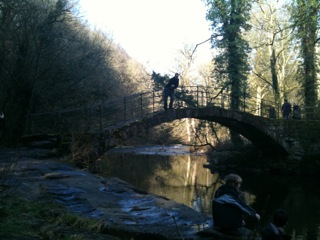 We are blessed to live in such a beautiful and peaceful part of the world. We took the pooch and the boys for a stroll on Sunday, heading towards Roman Lakes, close to the ancestral home of Samuel Oldknow, a Marple Victorian mill owner. We took a circular route along the shores of the lakes, hung a right down a path towards the Roman Bridge, up through some woods where we reached Strines Road. We then crossed and headed steeply up to meet the Peak Forest Canal. At this point we crossed the canal and rambled through the woods. A path took us to Ridge Road, but we opted to head back through the fields to the canal. It's probably not kind to tell kids that we could get shot by an angry farmer who's barbed wire fence we had just climbed over, but they soon beat a retreat and we headed along the Ridge to Hill Top Farm and rejoined the canal. Anyway, I'm rambling now.

There's a great guide to roughly the same route, here.
Posted by Michael Taylor at 11:12 pm

The so-called "Roman Bridge" thought to have been built around 300 years ago.