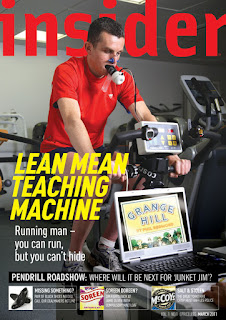 In this occasional series I do a random shuffle of my address book, skip along if it's either a muppet I only tolerate in passing, or someone I actually haven't spoken to in years. This time it's about Jim Pendrill, who was the first person I recruited to work with me at Insider in May 2000, and who has worked with me until he left on Friday for a new career in teaching. Pictured left, is his memorial front cover.

When I hear Robert Peston on the news explaining, for example, quantative easing, I wince. When I wanted something like that explaining, or simplifying, or analysing then I was confident that Jim Pendrill would do it as well as anyone and certainly better than the BBC's Business Editor. In our 11 years working together Jim has performed a number of different jobs admirably. As the editor of Midlands Business Insider he took our business into Birmingham and got us established.

He took on our contract publishing division and really made it fly, producing exceptional magazines for Manchester Metropolitan University, Clearwater and Target, amongst others.

But his greatest act of heroism was in taking over Yorkshire Business Insider. In his short time there he's launched a terrific rail campaign which will be his legacy and prepared the us for a bright future.

But this is just work stuff compared to the real business of real life.

First thing anyone who knows Jim is how fit he is. He is probably the healthiest and cleanest living man I know. His dedication to fitness shames me, if I'm honest, but is reassuring to know that his diet includes lots of biscuits and Soreen maltloaf. Who will I pilfer from now? But that steel and determination in him also manifests itself in a very deep sense of loyalty and an innate decency. Now that same dedication he has demonstrated in journalism (and in athletics) is being transferred to his new professional life as a high school teacher. He will make an incredible teacher - passionate, caring, dedicated, serious - but also a friendly figure of strength in the uncertain world of teenage kids. He will make good use of his experiences, I have no doubt.
The kids where he will teach are very lucky. Everyone deserves a teacher like Jim.
Posted by Michael Taylor at 10:00 pm