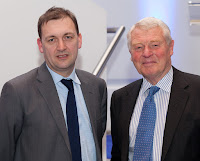 The current wobbles of William Hague once again throw to the fore the inherent problems of politicians and their suitability to do such a tough job. Hague is expected to be able to grasp a range of tactical responses to complex international events. His last government job - which ended in 1997 - was at the Welsh Office. Since then his preparation for being Foreign Secretary of the United Kingdom has been leading the Conservative Party to an election defeat, writing some books, being a very good after dinner speaker, campaigning with his comely young friend Chris Myers and being the MP for Richmond, North Yorkshire. None of that suggests he could have been able to run the Foreign and Commonwealth Office. It doesn't mean he couldn't, but it's hardly a smooth career segue is it?

These thoughts came to mind on meeting Paddy Ashdown this week and how ministerial office passed him by. As a leader of the Liberal Democrats he did OK. But his military and diplomatic experience caused him to be called to sort out Bosnia and for Gordon Brown to offer him the job of Northern Ireland secretary. He would have done a terrific job. He would have made a first rate Foreign Secretary, of that there is no doubt. He always cuts an impressive and statesmanlike figure. He has a tremendous grasp of world affairs, of history and of knowing the right thing to do. His talk at the Bridgewater Hall on Tuesday this week - organised by lawyers DLA Piper - was wide ranging, serious and, at times, scary. His remarks were off the record, so I won't repeat directly what he said - but the importance of legitimate structures that provide a framework to an interconnected world are vital.

But there's one more thing about him that will forever haunt him. That nickname. It doesn't seem to have done him that much harm, but everyone I told I was seeing him offered it as an aside. William Hague has to be careful how he rides out this current difficulty. A joke won't do it. A quip won't work. A bit of pumped up muscular liberalism might though. Just ask Pantsdown.
Posted by Michael Taylor at 8:32 pm

Labels: here's me with..., Namedropping, Politics