Writing for The Big Issue in the North 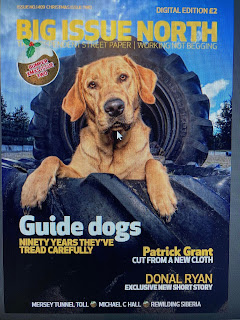 I'm very pleased today. There's a story published in the Big Issue in the North that I've wanted to write for a few years now, an interview with Patrick Grant from Community Clothing.

Full disclosure, I was an early adopter of the utilitarian clothing brand, I subscribed to the first crowdfunder and have a few of their hard-working pieces. But, as Patrick makes clear in the interview, they don't work with so-called influencers and chuck out freebies. I wouldn't want them even if they did. The reason I wanted to speak to Patrick and dig a little deeper into his philosophy is because of what he's doing for the cause of northern manufacturing and re-establishing a sense of purpose and pride to places that make things. It just so happens he's doing this from Blackburn, where I watch my football and have an affinity, but that's only part of it.

In so many nooks and crannies of the fashion world I hear barbed digs about what Community Clothing is, and what Patrick's agenda is. Maybe I didn't dig hard enough, but I don't see anything to snipe at.

Anyway, read it and let me know what you think. It's a good follow up to the insights I picked up from looking into emerging northern textiles businesses for The Mill recently.

It's the second piece I've written for The Big Issue in the North this year, but not the last. The first was an opinion piece on the awkward spot the BBC has found itself in, then this week's piece with Patrick Grant, on Monday I filed another feature for next week with a nationally known public personality with lots to say.

Kevin Gopal and Antonia Charlesworth, editors at Big Issue in the North, are also exceptionally good at nudging, pushing and tweaking. They definitely improved the piece from commissioning to publishing. It's not surprising that the magazine is always a good read. It's well written, authentic, lively, it has strong clear design, but with a very real sense of who it is for and what the reader will be interested in.

So, go and get yours today, support your vendors, and support quality print media.

Of if you can't get out to a Co-op store, or a vendor, and if you don't live in the North, then you can buy a digital copy online, here.

Posted by Marpleleaf at 7:03 pm