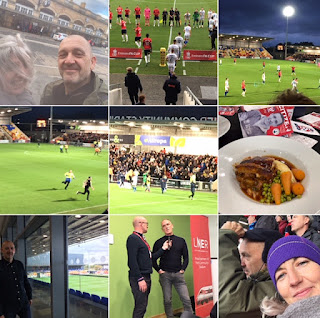 If there’s a TV producer reading this, then you must be kicking yourself at missing the opportunity to cover the footballing reality show of the season.

Buxton FC have given us laughs aplenty and a reborn love of football and I'm delighted that my Radliffe to Wembley odyssey will be with the Bucks for at least another round, which is sure to produce more drama.

First it was the spectacle of the 10pm floodlight failure against Kettering. But if that wasn’t enough of a “you couldn’t make it up” moment in the latest Carry on Football, we had the build up to their first FA Cup First Round Proper tie in 58 years. It went something like this: the assistant manager insists on going on a long awaited holiday, for fear of losing his deposit. The manager says that’s fine. The chairman embraces the oncoming panto season and says, oh no it isn’t. They both get the boot, a few days before the BIGGEST GAME IN THE CLUB’S RECENT HISTORY and on the back of a seven match unbeaten run.

A few weeks before, in a club, not so very far, far away, another manager leaves Curzon Ashton FC with immediate effect after the chairman reveals that he'd been in secret talks with another club.

And so it was that Steve Cunningham's first match in charge of Buxton FC was this juicy away match at York in the First Round Proper of the FA Cup, something even the veteran Bucks fans on our train hadn't witnessed in their adult lifetimes.

I called it before the game that Jamie Ward and Diego De Girolamo were class players capable of stepping up for the big occasion. Boy did they do that. Diego's worldy with just five minutes to go was no more than Buxton deserved. They had plenty of early chances, they constantly attacked and exposed York's soft underbelly. Their fans had also kept up a constant barrage of noise and pyro throughout, fitting for a team that matched York in every department, despite their opponents being full time, coached by Steve Watson, a former Premier League player with over 500 top class appearances in a decent career, and playing in front of 2,300 of their own fans.

So farewell then, York. Two visits to the York Community Stadium and twice I’ve seen this team of full-time professionals combust under pressure from gutsy part-timers.

Rachel joined me on this jaunt, partly because we entertained the vague notion that we might have a wander around York's city walls and cobbled streets. We didn't. Instead we booked a hospitality package in a lounge, and strapped on our VIP wristbands for a pie and mash with spring veg that would have had me cheering if I'd ordered it in a top country pub. We were sat with FA officials and some other real characters for a top afternoon of drama.

The chance encounters are what I think I've enjoyed the most about this whole adventure. The two lads from Exeter City we sat with on the train, on their way to Bradford City, three blokes celebrating one's birthday, and two ground hopping Bantams fans taking in a smart new ground rather than experiencing their side's draw against Exeter. Small world.

One of our other new pals was indeed a TV producer and we said we'd stay in touch. You see, I've got this great idea...

Posted by Marpleleaf at 5:14 pm