Lunch of the month for November 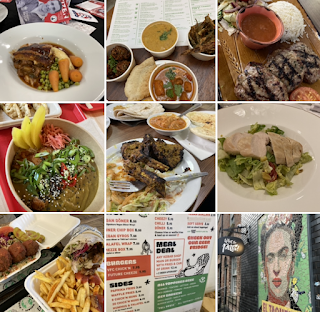 I had some really good lunches in November, even better than the month before.

I won't count the limp chicken salad (middle, right) at a hotel in Manchester that should know better, especially as the kitchen utterly redeemed themselves with a high quality set dinner for the guests at a business get together I was working at.

I probably shouldn't count the pie, mash and veg at York City v Buxton (top left). We booked in for some hospitality and although it was a total bargain it wasn't quite in the spirit of popping out for a quick lunch for under or around a tenner.

Bundobust brewery on Oxford Street, last month's winner, hit all the right notes again and me and my friend Katie properly delved into the menu this time (top, centre). Someone I know who works across the street from there has been for a ludicrous number of lunches. I dare say I'd be the same if still worked around that part of town.

The lunch special at Istanbul Grill in Denton was really good (top, right). It had a fairly neutral feel for a Turkish restaurant, like one of the neighbourhood Italians we go to locally, but the food was obviously from further east. No complaints about the food at all though, from me who had kofte meatballs, or from Kid4 who had the grilled chicken.

Rachel and I really enjoyed a katsu curry and dumplings from Manzuko (centre left) in the new food hall opposite the Bridgewater Hall. It was a good spot to dive into between sessions at the Louder Than Words festival nearby. It was also presented very, very well.

One particularly delightful surprise was a vegan kebab joint in the Northern Quarter called What the Pitta (bottom row). It was packed with crunchy salad, spicy as you like and the meat substitute was sufficiently juicy and tasty that I probably wouldn't have noticed if I hadn't been told.

My latest swoop on Kabana (centre), virtually next door, was in the company of a true believer, Kevin Gopal, editor of the Big Issue in the North. We also planned our visit properly and whoever arrived first had to pre-order the grilled lamb chops, which take a few minutes, obviously. Honestly, they are the best lamb chops I've ever had. The bread was tip top too, the side of chicken curry just right and therefore I have great pleasure in announcing that at the head of a very strong field this month is Kabana.

Posted by Marpleleaf at 7:55 pm