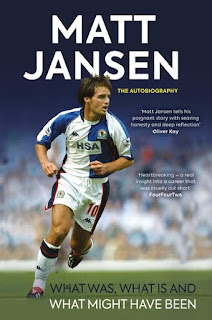 There are football biographies, then there are books about football fan culture, or the business end of the game, then there are books about the banter that surrounds professional football. I’m probably a little bit interested in the first lot, but only if they’ve been a significant Blackburn Rovers player or manager, curiously drawn to elements of the second and third category, and probably not that interested in the latter batch at all. I’ve never read the story of the career of, for example (and to pluck a random name completely out of the air), Dean Saunders. I do like fast paced business biographies, tales of bravery and courage, and the extraordinary achievements of relatable people.

Matt Jansen’s timely biography is rather brilliant, in that I found myself unable to explain quite what it meant to me, welling up with tears, relaying the tale of the post-accident Jansen appearing at Ewood for Bolton Wanderers and getting a standing ovation from all four sides of the ground. I was about as articulate this week, to my non-Rovers supporting 15 year son, as I was to Matt Jansen himself when I asked him if he was going to be alight in Velvet Restaurant in Manchester in July 2002. What I wanted to say was - “I have watched Blackburn Rovers teams for the last 25 years, reared on Wagstaffe and Garner, spoilt by Shearer and Hendry, but you, Matt, are something special. THAT goal at Preston, all those performances in that season culminating in THAT goal at Preston, THAT game against Arsenal. Oh, and Cardiff. That’s why I have a son called Matt, born six weeks after THAT day in Cardiff. Your day. I hope beyond all else, that you are going to be OK. I love you Matt Jansen.”

Instead I said something like - “going to be alright then, you? Please. Sorry?”

Or as my Canadian deputy commented once we were back in the office. “Just seen the boss go all weird and woozy in front of some soccer kid called Matty Hansen”.

But much as I enjoyed the rekindling of footballing memories - and I really, really did - and much as the latter narrative was challenging - it really, really was - this was a book about belief. The deep, psychological core belief in who you are as a person. How that motivates your actions and guides behaviour. Told against the backdrop of what might have been for a professional athlete who had his world shaken to its roots, it is at times heartbreaking and unbearable. The passages with the psychiatrist Steve Peters, with my mate Michael Finnigan, the performance psychologist, and his experiences around various doctors was truly fascinating. Jaw dropping, in fact. Professional football has been on a journey, as wealth has grown, so assets need nurturing, protecting. You also get the impression from the story just how many people in football management are winging it. No qualifications, no attention to detail, no success. I mean, work it out.

I won’t say the book is ultimately uplifting, because it isn’t. But to bear witness to one man overcoming loss - and it is loss - is at least inspiring. It becomes a book about choice too. The most powerful passages pivot around Steve Peters and how he approaches Matt. It’s what ultimately makes it such a compelling book.

A word then on professionalism. This is a well produced book by the impressive imprint Polaris. It is also very well written and very smartly constructed by the Carlisle News and Star journalist Jon Colman. I like the way it is Matt’s story, but not without critical voices - his wife, his father-in-law, friends like Garry Flitcroft one of many people who emerge from the book with abundant generosity of spirit and time.

This is also a welcome addition to a conversation I’m delighted is happening more and more, that mental health matters, that the mind matters.


So I’ll say now all that I really wanted to say to Matt in 2002. Thank you. And that I wish you every happiness.
Posted by Michael Taylor at 8:43 pm