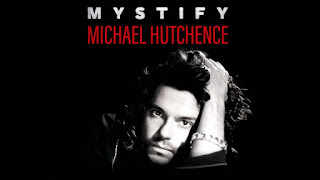 Mystify Michael Hutchence is a terribly, terribly sad film.  We all know how it ends for the INXS front man, but the build up to the conclusion is still a compelling tale. For all its sorrow, it is sensitively put together by the film maker Richard Lowenstein, who made their beautiful video in Prague for their standout breakthrough hit Never Tear Us Apart, the right mix of celebration and lamentation.


But while it is a hugely impressive visual achievement, it is still somehow stylistically and gloriously messy, and eschews the talking head style of documentary in favour of a mixture of home movie clips, concert footage and splices in archive material which focuses relentlessly on Michael, pretty much like the image of INXS in their heyday. None of it makes Michael any less striking, or the film less of a spectacle.

As a generation of music fans we’re not short of tragic stories of those troubled tortured geniuses who burn out and leave us too soon. From my own musical sphere I have the works of David McComb, Kurt Cobain and Ian Curtis to look back on for that early glimpse of their startling careers and wonder what might else have been.

Hutch was different. He always had a vivid star quality that far exceeded the musical reach of his decent hard working rock band. When I lived in Perth in the late 80s he was considered cool and iconic even if the rest of the band wasn't. I was won over by his live presence at the Perth International Arena on the Kick tour in 1988, a crescendo to a marathon 18 month global slog, and considered myself a fan and stuck with them. Journalists and other mates who knew him also had stories of his generosity, kindness and capacity for hard work and hard partying.

But this film isn't really about his musical legacy - did he have one? - but the story of the relationships of a global rock star. His family, the band members, and the women. How a warm, beautiful man, went from one mad passionate relationship to another, usually with gorgeous global superstars, but starting with his first love Michele, who inspired the sentiment of Never Tear Us Apart, and was the last person to speak to him before he died. You occasionally hear it said that someone at their height of their fame ‘could have anyone he wanted’ but in Michael’s case he could. After seeing the video for the Chris Isaak song Wicked Game, Michael asked the director to introduce him to the star of it, the world’s most desirable supermodel, Helena Christiansen, and asked her out. And that was on the rebound from Kylie Minogue!

Though the inquest into his death in a Sydney hotel room in 1997 recorded a verdict of likely suicide, it was contested by his grieving widow Paula Yates, who herself died of a heroin overdose a few years later. What the film reveals in a testimony from Helena is that he suffered a brain injury after being punched in the head in Copenhagen in 1992 and was never the same again. He lost his sense of smell, had no taste, and suffered mood swings and blackouts. And as Kylie says elsewhere in the film: “Sex, love, food, drugs, music, travel, books, you name it, he wanted to experience it.”

It’s hard to say whether the film advances a theory or closes a book. I’d say it tells one aspect of his life. There’s a further mystery over his money, some of it revealed in the leaked Paradise Papers, that his assets were held in offshore trusts and companies, out of the reach of his immediate family and intended beneficiaries. You also come away with the feeling reinforced that the entertainment industry can be cruel, the pressures to sustain success, or deal with a fall from the summit, enormous.

I found the film sobering and hard to watch. But for all the trappings of fame and fortune it all comes back down to what really matters in the end. Love. Love for your family. Love for yourself.
Posted by Michael Taylor at 10:49 am