If the shoe fits - repair, recycle, renew - me and my Mephisto's 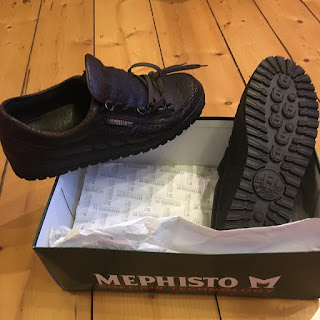 New shoes? Nope, but I only refurbished my absolute favourites. These Mephisto Rainbow beauties have been worn relentlessly since I picked them up from FW Tyson in Ambleside in 2014.

They've got the comfort of trainers, and are a true French design classic. They also come without the connotations of wearing trainers for doing something that isn't sport, for a man of my age. So, I simply couldn’t bear to throw them away when the sole had worn down and splits to the stitching got worse. Normally I'd just start to look for something similar, as good, or even replace them like for like.

But my I've recently bought a couple of pairs of Joseph Cheaney shoes. Hand crafted Northampton made exemplars of British craftmanship. They come with a lifetime guarantee that the skilled shoemakers can bring well worn pieces back to their best.

It got me thinking about these Gallic glories. I found out that there was this bloke in Burnham-on-Sea who does a refurb service, Footwear4you. We had a lovely chat on the phone about how it works, so I popped them in the post and waited to see what happened. He sent them off to the factory in France, four weeks later I got them back, and I'm staggered at the results. They've had a real overhaul, a brand new sole, they've seamlessly stitched up a couple of the tears on the trim, and polished them up far better than I ever could, as good as new, and thrown in fresh laces. Remarkable. Great service and a reasonable price as well. As my Dad has always said, 'pay less, pay twice'.

There's been a growing backlash against fast fashion lately. The alternative is buying better quality because it lasts, getting things repaired because they're worth it. These definitely are.
Posted by Michael Taylor at 10:40 am