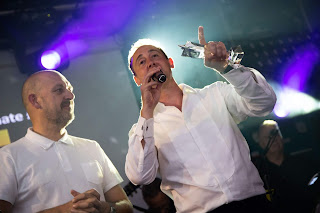 It was a real honour to be involved in the Y Factor Reunion 2019. I hosted the whole event and presented the winners trophy (left) to Kieran Lawton for his incredible performance of Try A Little Tenderness (oh, the irony of a Private Equity guy doing that song!).

But joking aside, there was a tenderness involved in the whole enterprise. When we convened to get the band back together there was a real sense of mission that this street homeless problem in Manchester has become morally unacceptable. In Mancunian Way we found a charity that really appealed to the rest of the group, not only for the symbolism of actively tackling the homelessness crisis, but for the sheer gritty bloody mindedness of the charity's founder Nick Buckley in how he delivers help and assistance in a non-nonsense, tough love, Mancunian way.  Personally, I applaud the Mayor's Bed Every Night campaign because at that moment of crisis people need that immediate response. But where I think the Mancunian Way approach struck such a chord was in how Nick spoke about the small and targeted interventions, and partnerships to build trust with employers, that can really transform lives for the long term.

Throughout the evening, 10 acts across the corporate finance industry came together to show their support by performing with a live band; led by two great friends of mine, Clearwater International CEO, Michael Reeves and Director at ABN Amro Commercial Finance, Jeremy Smith.

Each performer was judged live by our celebrity panel; Penny Haslam, Paul 'Boy George' Johnson and Aziz Ibrahim, followed by a live vote from our sold-out audience, to determine the winner of the Y Factor trophy.

It also reminded me how much I enjoy working with people in the world of corporate finance. They are smart, good at what they do, but for all the bad press they get from people in other corners of my world, they are amongst the most generous and decent I know.

For me the passion and power of the evening shone through. Every single participant really pushed hard and never lost sight of what we were doing it for. In total, we raised over £50k, which could ensure projects run for two years. It's not too late to donate, you can do that here.
Posted by Michael Taylor at 1:08 pm