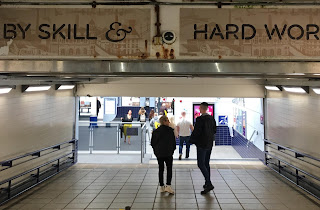 I did something yesterday that I haven’t done for nigh on 20 years. I went to a Blackburn Rovers home game by train. We’ve come to the conclusion that one car is quite enough for our family, and there were other pressing places for it to be yesterday.

Now that Joe and Louis are both living in Manchester, it actually makes logistical sense to put our fate in the hands of Northern Rail and see what flows. I could hardly describe it as an adventure, even with Millwall as the opponents, but as we were walking down Bolton Road from town, Joe said to me it felt more like an away game, because he had no idea where we were. Our usual route is from Lower Darwen along Branch Road.

But from when we passed underneath the inscription at Blackburn station - By Skill and Hard Work - I was pleasantly surprised. It always helps to brighten a place when the sun shines, but the public space around the Cathedral and the Mall was very nicely done. The shopping centre was both busier and tidier than I’ve seen in other town centres around the North West.

We stopped for lunch at the Chippery, a bit of a Blackburn institution, where the friendly staff served us up a decent pre-match pie and chips. I was keen to visit the Community Clothing pop up store on King William Street. I was an early adopter of Patrick Grant’s social enterprise, providing basic items of clothing, made locally. I invested in the first crowd funded call for support and have steadily accumulated a wardrobe of staple items, a mac, a crew neck lambs wool sweater and some gloriously well fitted selvedge denim jeans. An order is pending for a Dutch-style Peacoat.

Anyway, long story short, it’s really whetted my appetite to explore Blackburn a bit more. Through October there’s a film being shown at Blackburn Museum which tells the story of Patrick’s fashion project. Given it’s made by film maker Aaron Dunleavy, it will have an honest earthy style and be one to savour. Also next month is a Trainer exhibition at the Cotton Exchange being curated by fellow Riversider Gary Aspden, the bloke behind the surge in appreciation of the adidas Spezial brand.

More information on the exhibition is here.

Football wise, the first half was nothing to write home about, bar Derek Williams’ left foot screamer. I like 3 at the back, but it sometimes seems like the players and the fans don’t quite believe the manager’s vision. Tony Mowbray seemed a bit peeved at the performance in his post-match interview (frustraaaaated, even), but the high spots for me were the sheer dogged tenacity of Bradley Dack to try and pick the lock of the opposition and the growing influence on the pulse of the team of Stewart Downing.

It seemed a good day to finally break another family ritual, our pre-match Twitter predictions. Given they’ve both admitted to being fundamentally dishonest - never predicting what they truly feel - one an optimist, the other the opposite - we’re instead just going to pick our own man of the match.