The season's over - the view from the Riverside 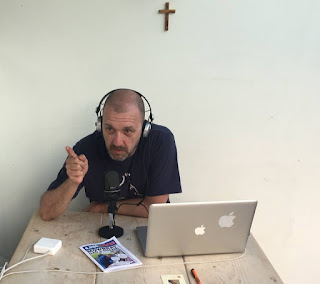 We've recorded a BRFCS / Rovers Chat end of season podcast, which was a real blast.

It's got Rich Sharpe from the Lancashire Telegraph, Tom Schofield from Rovers Chat and the 1875 podcast, Scott Sumner from 4000 Holes me, Mike Delap representing BRFCS and superbly pulled together and edited by Ian Herbert.

We even try a Blackburn Rovers-themed "Defend the Indefensible" round.  It's all so massive we've done it as a two parter. Part 1 and Part 2.

In his typically modest and understated way, Ian has thanked publicly all of our panelists and guests this last season who all give their time for free. Their support is greatly appreciated. I'd like to thank him, it's no small effort getting us match fit and ready to be vaguely coherent. Hopefully you enjoy listening. Please spread the word if you do... The link on iTunes is here.

I think I've pretty much exhausted everything I can say about this great, great season. It's really been a lift and I'm chuffed to have made some good pals along the way. There's more than just the team to be proud of, as I say on the podcast the club is in good shape behind the scenes, the media is as good as it has been for a long time - Rich Sharpe at the otherwise dismal Lancashire Telegraph is a true pro - the social media team at Rovers are top drawer, 4000 Holes fanzine is really good (though the quiz is too hard) and I always look forward to Jim Wilkinson's Blue Eyed Boy blogs - very, very special.

I did promise to mention the home games after last week's blog about the away trips. We usually go the same way, we always park in the same place, we try and get a pie from Leavers, but in its own beautiful way, every day is different. As a fall back, an overpriced Hollands on the ground is alright, I suppose.

Best performance: Shrewsbury. That was great, it had everything including a dreadful referee. But we properly marked out our intent that day.

Most ashamed to be a Rovers fan: Never. I even can't be bothered to summon up the energy to be angry about the dicks that invaded the pitch before the end of the game on Saturday. I know we did it at Doncaster, on the whistle, but Saturday was a bit different and not very spontaneous. Quite liked the righteous disgust from the rest of us.

Best pre-match scoff: Leavers on Bolton Road is still the king of the pie. I'll take whatever they have by the time we've got there, potato and meat for Joe, or chicken and bean for Louis. I like their traditional meat pie best.

Best visiting supporters: You'd expect the North West clubs to bring a few, and they did, contributing some real energy to the season, Oldham and Wigan both did so. But Plymouth brought a fair old contingent for a Tuesday night when they were bottom of the league.

Most shithouse team: Northampton Town at home, as they were away. I'd sign John-Joe O'Toole just for the devilment.

Best team we played: The teams that beat us at Ewood deserve respect for doing just that - Doncaster and Wimbledon - but Bristol Rovers were robbed, frankly. They should have beaten us fair and square, they were brave and athletic and maybe like a few others (Southend, Peterborough), just lacked that consistency and X Factor - we've been so blessed with Bradley Dack and Charlie Mulgrew to pop up with some magic when it's needed.

Best thing about League One: We won most weeks and I'd forgotten how that feels.

Worst thing about League One: the referees have been absolutely dreadful. Most are unfit, all are inconsistent, they are either ludicrously fickle or stupidly stubborn. It evened itself out over the season though.

Best thing about BBC Radio Lancashire when we jump back in the car: Tony Mowbray's interviews. I could listen to Mowbray all day. He describes a game I actually watched and he doesn't whinge or come up with lame excuses. He has genuine enthusiasm for the game and conveys that real authentic belief in his squad without ever coming across as one of the lads. He's probably the best Rovers manager at the post-match interview that I can recall. Dalglish never gave much away, Souness was great, but often lost his rag, Allardyce and Hughes very predictable, Bowyer dour, Lambert incomprehensible, Kean and Coyle spouted nonsense. Tony Mowbray is peerless, actually.

Grimmest day: Hull at home in the FA Cup was awful, but it turned out I was seriously ill at the time. Spent the next few days in hospital.

Best day: The build up on a glorious sunny day to the last game against Oxford was special.

Thanks to everyone again. All the people who sit round us make for a great occasion too. The old fellah behind with his dry asides, the young bloke who is so well-informed about other results he seems to have Jeff Stelling in his ear, then there's the loud bloke who berates the linesman every match and some berk who screams "Referee, get him off, he's an animal. He could have killed him!"

None of this would be the same without you, Rovers fans. It was even worth getting a speeding ticket on Grane Road on the way to the early Wigan game. Roll on next season.