He's always a fascinating person to listen to. All of the accolades that have come his way over the last two decades are deserved. His vision, his workrate and his sheer determination to push Manchester ever onwards has been unstinting. I've interviewed him before in front of an audience on a few occasions, and done a couple of sit down profile interviews. One was just ahead of the Commonwealth Games in 2002, one of his greatest triumphs. The other was weeks before the referenda on a congestion charge in 2008, one of his rare defeats. Both are in my portfolio, if you’d like a copy, let me know by email. 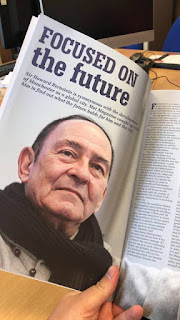 I interviewed Howard in the offices of Deloitte, where he now has a base. It was a stark contrast to having a cup of tea in his old suite in the Town Hall, and so was a slightly strange experience. His old office was always full of cues and reminders, awards on the mantelpiece, a framed City shirt, two seats from the old stadium and a firm sense that this was his habitat. The same also applied when we'd have lunch at Wings, surrounded by signed plates of Manchester's great and the good and plenty of passing friends.

But the more you think about the lack of a sense of place in a 4th floor meeting room in Spinningfields, the more you focus on the challenges of a city still gripping big systemic problems. But then there's the very presence of the building itself, a part of town that barely existed when we first broke bread in 2001. He has always pushed the terms of what we should be talking about. The kind of city Manchester wanted to be, the notion that if you believed the work was ever finished, then the very idea of Manchester itself was finished. He is the ultimate progressive.

My agenda was very specifically to avoid the past and focus on the future. And as the headline reveals (right) I wasn't disappointed.

We covered a lot of ground - but a golden thread that ran through everything was the importance of partnerships to raise the ambition of Manchester. These apply equally in sport, the creative sector, devolution and housing.

I'm pleased with the end result. I hope people like it. But to be honest the whole of the magazine is quality. Covering a ton of things we're working on at Manchester Metropolitan University to make the city more successful, more tolerant, and more inspiring than ever.

Just a quick final point. I just can't stay away from magazines. A blog or a digital snippet is like a snack. A well put together magazine is still a work of beauty and nourishment. I can send you a copy if you'd like to be added to the list, email me here.
Posted by Michael Taylor at 7:20 pm