For no other reason than the sun is out, and maybe thoughts have turned to great holidays, I found myself humming along to this 1986 Pet Shop Boys classic tune over the weekend. Paninaro - a youth cult named after a sandwich, as this piece from Vice says. It’s even inspired a tribute t-shirt from Casualco.com which predictably sold out within hours.

At the time I felt the Paninaro look was a real coming together of styles. The whole football dresser thing had gone a bit stale - splintering off from Italian sportswear into flares and cords up north, and slacks and big jumpers in the south.

I was a first year student at the time and heading for a summer in the USA and Canada. It's probably the look that fixed my own personal preferences for life.

Today, as a man who should probably know better, I've still got several items of that look even now - checked and cotton/ light denim shirts, plain blue blazer, the best jeans I can afford (then, Levis 501s; now, selvedge denim), brown sturdy shoes (then, imitation Timberland; now, Mephisto), a Breton striped t-shirt, and my staple for all time, a two-button Lacoste polo shirt. In my younger days I liked a bold sweatshirt, though now I prefer British knitwear from Sunspel and John Smedley. Back then my pride and joy was a white C17 parka with orange lining and two badges on the sleeve - Juventus and Fac51. Oh, and backpacks. I've always loved a good backpack: Karrimor, North Face, Patagonia.

As I said in this piece about the Northern Monkeys book: "It didn't have a name then, but this was the emerging Paninaro look. By the time of our third year in 1987-88 my mates were well into looking smarter too - we liked Chevignon, Chipie, C17 and Timberland for a night at the Hacienda or the Venue, way before the Madchester druggie rave scene."

The deeper satisfaction of all of these items is still layering on a look, grafting different pieces from unlikely sources. Probably my favourite clothing brand now is Albam, which can definitely trace a creative lineage to this time and place. And to quote Paul Weller from this time, 'our favourite shop' is either J. Simons or Oi Polloi. However, I can't afford to just waltz in and pick anything I like. And there's no fun in doing that either. 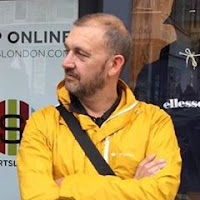 I've told tales before of the treasure trove that was Shop 70 on Lamb's Conduit Street in London's Holborn, from where I bought a Stone Island hooded sweatshirt, which I still have, and (tragically) a CP Company duffel coat that I don't.


In its stead, and as a cocked cap to the video above, I found my current favourite coat, my Adidas Originals yellow rain jacket, which I discovered in... Well, that would be telling, I just wish I'd bought the matching blue one as well.
Posted by Michael Taylor at 9:13 pm