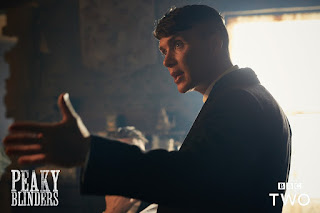 I did a seasonal round up of the year's telly in August. I can't honestly say there's been anything new that's blown me away since then. Loved the new Stranger Things, loved the second series of the A Word.

I was slow to get going with Peaky Blinders, but this series has been explosively brilliant. Helen McCrory as Polly is the best character in any period drama I can recall. With a strong supporting cast on top form Tom Hardy and Aidan Gillen really rose to the challenge of something so atmospheric.  The scenes with both took the whole thing to a new level.

The biggest disappointment on the whole of telly was the continual slow death of The Walking Dead. I lied, I said I wasn't going to watch season 8. But I did, and at the half way mark, I have to say that I am at least relieved it hasn't got worse. Well, to be fair, season 7 was dreadful and this first half has tried to pick up the pace. But really? Nothing has happened. Nothing has actually changed since Glenn and Abraham were killed at the end of start of season 7. Negan is still alive, in power and to be fair to him, he's not the one randomly butchering people.

When I said enough is enough in April, I asked a few questions, none of which have been adequately answered, but they're the constants that try my patience and they all came round again.

1 - Where did Gregory go? Just vanished from the fight, is still a weasel, why's he still around?
2 - How did the Alexandrians not get butchered when they turned on the Saviours? Same with the Hilltop crew with Maggie, especially when evil Simon ambused the convoy on the road.
3 - Dwight, friend or foe? - still not clear.
4 - Are all three armies the worst shots ever? Was someone firing blanks? Who died?
5 - Why on earth do the garbage pail kids speak so weirdly, who are they, where are they from? Why are they so woefully underwritten?
6 - And what next for that Tiger? Well, at least we know the CGI budget was exhausted for that one.

You can add the whole unresolved, woefully untold Oceanside plot to the mix and you're still left with a mess. The comics, as I've said before, are so much better. For the second half this series has one last chance. It's one of those weeks when I'm very grateful to be British.
Posted by Marpleleaf at 2:51 pm