Northampton away - a load of cobblers 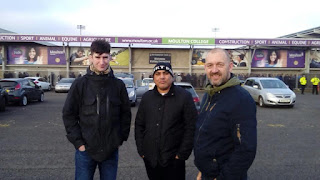 Our tour of middle England hit location fourteen today. Northampton Town's Sixfields stadium is a dreary unfinished Lego identikit stadium on a remote industrial estate on the edge of town.

A shiny new train station for the commuters to Milton Keynes and London, and a new university building were the high spots in a town centre that felt quite Northern for its faded high street and the legacy traces of its shoe manufacturing industry that remain dotted about.

There seemed to be more people heading for the rugby match against Exeter down the road than to see the local football team, which confirmed why a fast growing town of 212,000 doesn't have a football club playing at a higher level.

As for the match, a below par performance from an under strength Rovers saw a rare draw (only the third on the road). It proved how much the classy Charlie Mulgrew is worth to the overall character of the team that Rovers never hit top note until the last ten minutes. He'd pulled out just before kick off and although his replacement Elliot Ward did OK, the assurance a player of Mulgrew's class brings was lacking. Bradley Dack’s goal was real quality but for Craig Conway to miss an open goal AND Marcus Antonsson a penalty just smacked of a lack of professionalism on the day. But hey, we're now unbeaten in 12 and at least the 4000 home fans went home ecstatic from their cup final, especially the Northampton Raider we encountered on the way back to the station who literally said to me, "you want some? I'll give it to you".

Posted by Michael Taylor at 9:34 pm