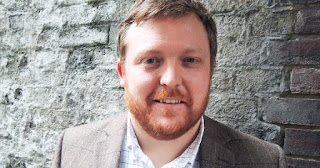 I was delighted to hear my mate Michael Merrick on Radio 4's Four Thought recently. It was in so many ways so typical of him. Searingly honest, humbly self-examining and so very modest for what it left out.

So, I thought I'd add him to the "my mate" series on this blog, where I randomly shuffle my address book and talk about my friends, how we met and what I like about them.

Michael tells the story on the programme of how he graduated and thought of himself as above his family, and then how that has spoken to him about the idea of social mobility. It's always slightly incongruous to listen to a friend talk about the previous version of themselves. Especially as the Michael I know would never do that, he has such genuine love and admiration for the treasures of family and community. Rightly, the piece has been praised for the honesty and depth of thought that has gone into his own journey and how he reflects on social mobility and how kids leave their homes to 'better themselves'.

Michael and I met on Twitter. We had a shared interest in Catholic education, Catholic social teaching, Labour and Lancaster. I'd been impressed by his work for Philip Blond on his inspiring and ambitious book Red Tory. When we eventually met in real life, I'm pleased to say our friendship took on an upward tick. Though it was politics and faith that brought us together, there's so much more about this amazing man that I have grown to admire.

His advice to me as I stepped into politics was exemplary. Starting with why? But linking it to our duty and our salvation. He pulled off a remarkable conference in Manchester that drew together a wide range of voices and thinkers for a tradition he and I wanted to co-create - to place community, work and family into the political value system. We've both since moved away from Labour, and share similar frustrations that Maurice Glasman's Blue Labour seems to be going nowhere. We voted on different sides in the EU referendum and probably disagree on a few other things too. But my admiration for his solid insolence and defiance will never waver.

But what I was driving towards is how much Michael left out in this most recent exercise in soul searching. In his generous sharing of his life journey he didn't mention that he had been a professional footballer with Norwich City, nor that he has been a philosophy teacher in a High School, but is now part of a leadership team as deputy head in a Catholic community primary school.  That school has this week just received a "good" rating by OFSTED for the first time since 2001. I don't know the other people involved, I'm sure they have all played their part. But what I do know from the man I've seen; the clever, gentle, inspiring man, is that he has been involved in something very special. If I was a parent in Carlisle, I'd be fighting to get my children educated by him.

In the midst of this tribute I've also not touched on Michael's family. He has a lot of children and is a devoted husband. Or his humour, or his quest for truth...

Life takes you in different directions from time to time. I'm just very proud this week to doff my cap and say my prayers of thanks that I can count Michael Merrick a friend.
Posted by Marpleleaf at 4:56 pm