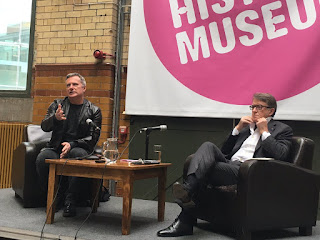 Yesterday was the first day of the 2017 General Election campaign. Twenty years since Labour won so convincingly I had the pleasure to listen to Professor Steve Fielding interviewing Peter Mandelson at the People's History Museum.

I owe an enormous amount to Peter, now the Chancellor of Manchester Metropolitan University where I've worked since January 2016. He's put his shoulder to a couple of projects I'm fully invested in, such as the MetroPolis think-tank, but more than that, New Labour gave shape to the ideas that have made all our lives immeasurably better.

Today, he spoke about that election, as part of the New Dawn exhibition to mark the 20 years since that groundbreaking poll victory for Labour. He discussed the ways in which the party could have done more still and scotched a number of myths and falsities about it being some kind of Tory-lite neo-liberal continuation of Thatcherism. 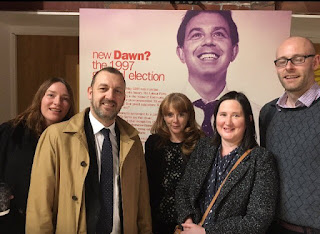 The podcast will be available soon of the event, so I'll share it here, but he spoke about New Labour's enabling of ambition, the under-promising and over-delivery of social reform, especially in the NHS and education. He also spoke about Labour's traditions - how Attlee and Morrison, then Wilson and Crosland bequeathed an intellectual and political legacy. It was a topic of discussion that the emphasis on the "New" rather than the "Labour" is a lesson to be learnt today. The 20th anniversary is not being marked by the present Labour leadership.

My favourite bit was in response to the first audience question. I have heard him tell the full story before about the quote attributed to him about being "intensely relaxed about people getting filthy rich". For accuracy, here's John Rentoul's quote in the Independent from a seminar he did at King's College London last year:

At a meeting in 1998 the CEO of Hewlett Packard, Lewis Platt, said to me, "Why should I consider investing in a country like Britain that’s now got a communist government?" And I said I was intensely relaxed about people becoming filthy rich, as long as they pay their taxes. That second part is often left out, usually by The Guardian. What’s the lesson there? Never do irony.

We had a good chat amongst friends as well today, we talked about what we're going to be doing to support colleagues seeking re-election and to ensure we have a strong Labour party ready to meet the new challenges of these quite extraordinary times.
Posted by Michael Taylor at 8:09 am