Blackburn Rovers - the despair I can handle, it's the hope I can't stand 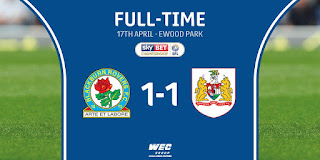 I've never seen ball skills like it. The craft, the dedication and the persistence. And all the more impressive because it was done in the colours of the mighty Blackburn Rovers. Yes, that seven-year old girl doing keepy-ups was a brilliant half time distraction from the dross we had just been served up at Ewood today by the team we have learnt has the 9th biggest wage bill in the division, according to the director of football Paul Senior.

We were lost for something to say on the way home. I wish we'd been at the game the sponsors had seen where Jason Lowe was man of the match. Or the one the two blowhards on Radio Rovers saw where Bristol City "sat back". I've never understood that fatuous and meaningless phrase about a sporting encounter. Never mind that they managed more shots on goal and tested our (second choice) keeper far more than we tested our former third choice keeper between their sticks.

I genuinely don't think I've seen a worse performance from a centre-midfield pairing than that served up by Hope Akpan and Jason Lowe today. We saw the worst of Liam Feeney. We saw some horrendous passing by Elliot Bennett who was seemingly doing Ryan Nyambe's job for him as well. Tactically, Mowbray got it wrong today. The first half formation of 5-4-1 failed utterly. And the problem is the midfield. Ringing the changes at half time saw some kind of improvement, Bennett carried on doing Nyambe's job, he just didn't need the young defender on the pitch to do it. He put in a brilliant cross for Gallagher's goal and turned to our stand to roar his anger at the crowd, a proper snarl. I hate it when players do that. It's like he's saying, get behind the team you bunch of know-nothing idiots, love us blindly. Rightly, he'll have got some stick for some of that dreadful wayward passing today, but there's no need for that.

The goal of the season montage before the game shows that we have players who know where the net is - real quality goals. But Gallagher, Jao, Emnes and Mahoney didn't terrorise the defence enough. Then again, a player like Mahoney is always most effective running onto a ball so he can make a run into the box, or to skin a defender. Lowe has proved incapable of delivering that kind of pass.

Birmingham City seem to be doing their level best to loosen our grip on that last relegation spot. But we have win two of our last three games, if not all of them.

I've never really thought that we were good enough to stay up. We've had flickers of being a good side, but they've just been that, flickers. We didn't go to Forest on Good Friday, so we've missed a high among a season of lows. What I haven't been prepared for was just how miserable it was going to be. Watching this stumble to the inevitable is proving far more difficult than I imagined. It's the despair I can handle, it's the hope I can't stand.

Posted by Michael Taylor at 9:03 pm