Protests, anger and football - a bit of context 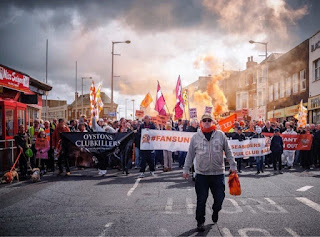 When is it alright to protest at a football match? Discuss.

It's always your right to protest, to wave a banner, but while sometimes it's a legitimate expression of popular will, at others you just end up sounding like a spoilt brat. The rest of the football world looks on  and makes a snap judgement based on a shallow reading of the facts.

As the season draws to a close the banners come out. The frustration, the broken promises, the problems with the board, they all bubble to the surface. The common thread is often a feeling of powerlessness. But who are we to judge? What do we who follow another team know of the back story, the daily reality? Here are a few examples.

The Justice for the 96 campaign has at times been sneered at and patronised. But by God they were right. Persistence, pride and passion directed at the police, media and a judicial system that has failed them.

Blackpool fans marched on their stadium on Saturday, outraged at the dire football, the years of goading by the Oyston family. Yes, I totally get that.

There was a pitch invasion against the board at fan owned FC United. No, I honestly can't fathom this. There is a mechanism, a democratic structure, to change things at this club. Pursue that by all means at the EGM that has been called, but this can be easily sorted without indulgent showboating.

FA Cup holders Arsenal are on course to finish in the top 4, but the placards were out calling for Arsene Wenger to be sacked. Arsenal fans are one of the minor reasons I don't listen to 606 any more (Robbie Savage is the main one). Supporters of clubs owned by oligarchs demanding more and more spending of more and more money in a season where Leicester City are going to win the league make me feel ill.

We have form about this at Blackburn Rovers. A mid table and unremarkable season under an unloved but plodding manager sees the surprise appointment of a Scottish manager (ex-Celtic player) who makes things worse. You know the rest.

Well actually you don't. On Saturday at Rotherham some Rovers fans sung: "Paul Lambert we want you to stay" (I didn't) and the blame was firmly directed at Venky's, our strange owners.

Loop back a few years ago and the anger was almost totally focused on Steve Kean. At the time I thought that was wrong. It personalised an issue, made the fans look like a baying bullying mob and got Venky's off the hook. The villain of the piece was the agent Jerome Anderson and his involvement in bringing Venky's to the club and tearing it apart. Kean was enthusiastically and willingly complicit, he was clearly out of his depth as a manager, but absolutely everything that was going on at the club pointed to a meltdown under Venky's ownership. The Shebby Singh circus that followed proved all those fears to be right.

The Rao family have been truly terrible owners, but they have kept paying the wages. I don't know how this situation is in any way sustainable. How on earth can they expect to keep writing the cheques to support an asset they have no operational or strategic interest in? I'll be honest, I'm surprised they've lasted as long as they have. The future has to be under different owners - preferably a fan owned co-operative and local businesses - but that is a pipe dream in truth. There can be a better future, but it is sadly going to have to get much worse before it does. That will inevitably mean administration, relegation and a rock bottom we may not have experienced before. Think Portsmouth.

I looked around at Rotherham on Saturday. A tidy new stadium (back up to 71 of the current 92) with a decent atmosphere, a run down town in the shadow of a bigger metropolis. A manager who has saved the season with graft and tactical nous. Is this our future? I hate to say it, but it might be. This was what I'd have settled for in about 1990. How does the song go, "If we hadn't had such riches, we could live with being poor".

Is that then a situation worth protesting about? Of course. But it's also one that has to go beyond anger and forces us to get organised. To be ready to take a full part in rescuing the husk of what will be left. It won't be easy, or pleasant, people will fall out and egos will collide. It may never be as great as the heights of the past. But this is our future, let's hope we can shape it.
Posted by Michael Taylor at 9:00 am

I think what would help Rovers' fans is being clear about what is the ultimate objective of any protest. A number are calling for "increased communication" - the only communication I want from Venky's is confirmation of their departure. I am prepared to pay for their departure with non-league football under a community owned club if needs be; but many (perhaps younger) supporters cling to the dream of a return to the Premier League & believe Venky's ownership offers the best chance of that. Recent statements from Pune call that into question.
Whilst there is a lack of consensus around an agreed objective, any protest is seriously undermined.

I am intrigued by the C.A.R.D. campaign being run by Charlton fans. Their gripes are remarkably similar to ours & their fate this season will be ours next season I suspect. They seem to be unified & creative in their protest strategy.

We could learn a lot.

Sadly, it's what happens when sport becomes all about money rather than endeavour. It's what the RFU fought a Canutian battle against for years, and will, I fear, also become the future of rugby.