On this day in 1943 - remembering my Grandfather Francis Edward O'Hare 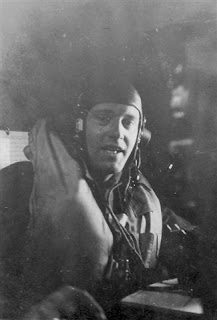 On this day in 1943 my Grandfather died. He was Flight Sergeant Francis "Teddy" O'Hare of the Royal Canadian Airforce who served as Wireless Operator on board Halifax Mk. II JB-920 coded LQ-F during an operation to Duisberg.

The aircraft crashed 12 miles from Duisberg along the banks of the Rhine, all of the crew perished. They were the first crew lost by 405 squadron since it was transformed into a Pathfinder unit.

Although he was born in Birkenhead, he joined the RCAF crew and his colleagues, like him, were all in their twenties and from Ontario, Saskatchewan and Detroit.

Thanks to the RCAF for continuing to honour his role and to Michael Oliver for his important work in creating the permanent memorial to the contribution of the RCAF at the National Arboretum in Staffordshire.*

None of us have anything but these pictures, facts and our genes to remember you by, Teddy. But your two daughters turned out fine. Wonderful women, the best mothers their sons and daughters could wish for. Amazing Grandmas, even a great Grandma now.

To those that fell. RIP.

* I've blogged about that here and here.
Posted by Michael Taylor at 8:18 am