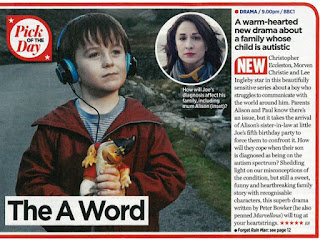 No-one does TV drama like the BBC. The Americans do it very well, but not in the same way. But no-one gets it so annoyingly, irritating, piously and awkwardly wrong like the BBC either.

Let's get the good one out of the way first - the writing by Peter Bowker in The A Word is stunning. It brings to life the complexities of a family challenged by the sinking realism that their beautiful son has autism. The direction and photography and sense of place is spot on. Sometimes it's the little touches that make a difference. I'm sure a continuity anorak like me, but with more detailed knowledge of the English Lakes, will tell you what's wrong, but I liked the fact that they nip to Lancaster. You do, when you live up there. A lazier writer would have looked at a map and sent them to Penrith.

Apart from poor Joe, the 5 year old at the centre of the story, but always on the edge of it, the characters all drive you mad. Well, families do, don't they? Sometimes they work it out and sometimes they can't.

I hesitated before watching it, so I've binged on it this week. I don't need a TV drama to know what effect a child with profound special educational and emotional needs has on a family. It's uncomfortable, the shock, the stages of comprehension and the allowances you make are all there. But more than anything is the love, protective sometimes,irrational, confused and flawed, but real love. There are times I've hid behind the sofa in a way I haven't since Doctor Who, as there are reactions and emotions on display that ring too true. I read somewhere that it didn't speak a truth about one reviewer's autistic brother. Maybe so, but that's not the point. It didn't try to be the last word on autism any more than it is about the tensions of succession in family businesses.

The real skill is that actually, really, nothing much is happening. It's just the stuff of life. It's a sharp contrast in pretty much every way to Undercover on Sunday nights. There, SO much is going on. Undercover cop, man on death row, death in custody, drugs, sex, corruption, conspiracy. But it's all nonsense. The confusing 20 year flashbacks make no sense as the characters look EXACTLY THE SAME.

I don't crave realism - I'm addicted to the Walking Dead afterall - but if you have to watch Undercover you must then suspend any understanding of police culture, the establishment and how someone who has never prosecuted a case can end up as the Director of Public Prosecutions and immediately throws her top team onto a pet project dating back 20 years. It's the BBC production department's view of racist Britain in 1996. No, it's just not happening.

I've sat at a bus stop in a rural Northern village with my schoolfriends and then watched a scene in The A Word and gone, yes, that works for me. I've seen teachers tip-toe around issues and I know how hard it is to fight for extra support. Yes, all good.

I've also been on a demo in East London against the far right in the late 90s, but it wasn't anything like it was depicted in Undercover. That wasn't accurate. What was said, who was there, how it was policed. Undercover got it all wrong. It's then about trust. If that's faulty, then what else is? The main character pops over to Louisiana with far less bother than the cast of The A Word go down the M6 to Manchester.

At the end of it all though it's the writing. You can create the most fantastic high concept of a story but without character you can believe in, then it's sunk.
Posted by Michael Taylor at 9:27 pm