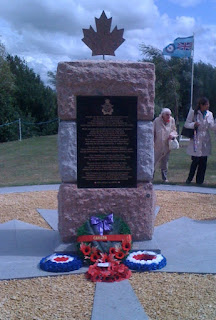 Until now there has been no permanent memorial to the Royal Canadian Airforce and their extraordinary contribution to the war effort in the Second World War. As I mentioned here, this has been a work in progress, and me and my Mum were honoured to represent our family at the unveiling of a new monument at the National Arboretum in Staffordshire. My Grandfather Francis Edward O'Hare, my Mum's Dad, died aged just 24, shot down near Duisberg in Germany in April 1943. He was serving as a pilot officer with the Royal Canadian Airforce and based out of Gransden Lodge in Cambridgeshire.

The ceremony was officially hosted by the Duke of Gloucester, who spoke well. But for us the most touching contribution was made by Commodore Kelly Williams, a senior military officer from Canada who is currently serving as the military attache to the UK. He spoke of meeting a war widow and her son, now 67, who never met his father and reunited her with a ring. The full story is here. When we met him later to thank him for his oration he spoke direct words of comfort and support to my Mum that meant so much to her.

I'd never been aware of the National Arboretum either. It is a symbol of the steady and stoic support for the contribution of the armed forces in this country. I've been to Arlington in Washington and to the memorials of Canberra. I've even been to the national monument in Ankara. But wasn't even aware of this place. It seems to have been born from a movement that has genuinely come from the people, to honour fallen heroes. It is a serene and impressive place. The central obelisk and statues form the centrepiece, but much thought has gone into its ambience. As the trees bloom it will be a magnificent haven to reflect and to honour.
Posted by Michael Taylor at 9:44 pm

Couldnt agree more with your sentiments about the National Arboretum and what it represents. The contribution of our former colonies to the second world war should never be forgotten, coincidentally my own father was an RAF navigator in a Halifax shot down over Belgium in 1943. He survived and had two years as a POW. Three of his flight crew were not so fortunate and are buried in Belgium. Two were from the empire , one Australian and one Canadian. Boys of 20 and 23. God bless them.