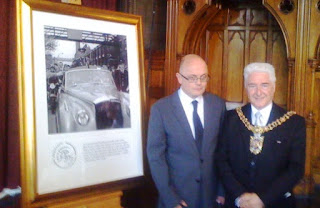 There's a quote from Gore Vidal that says "whenever a friend succeeds a little piece of me dies". I feel the opposite. Today I went to see my friend Steve Connor at the ceremony to unveil a portrait of Yuri Gagarin in Manchester Town Hall to commemorate the 50th anniversay of his visit to the city. Steve's pictured here with Harry Lyons the Lord Mayor of Manchester as he's driven the project along.

When I got there Steve was speaking with the backdrop of the Russian imperial flag. Part of him will have been disappointed that it wasn't the hammer and sickle (purely for reasons of historical accuracy, of course), indeed a couple of old "tankies" made that very point. Steve spoke so well, telling the story of how Major Gagarin came to rainy Manchester to meet the workers at Metropolitan Vickers and at the foundry workers union base in Moss Side and how he met Bernard Lovell, the creator of the Jodrell Bank telescope at a reception at the Town Hall.

"He was pretty much mobbed on his arrival by a crowd that included the then ‘Mayor of Stretford’. He then drove through Moss Side to the Union’s HQ, where his car was reported showered with ‘red roses, poppies and carnations’ and, this is my favourite bit, was presented with a specially designed medal that to my eye could have been the early work of Comrade Saville, if he’d been around at the time. It included the slogan ‘Together Moulding a Better World'."

There's some coverage here and here is Steve's blog on the plans for the celebration of the anniversary of the visit today with a flavour of what he spoke about today.

I knew Steve at Manchester University in the 1980s when we both wrote for Mancunion, the student paper, and were both in the Labour Party (he's one of only two people who still call me "comrade"). It was brilliant reacquanting with him again when I came back to the city in 2000 and I've particularly enjoyed seeing his business grow. Creative Concern isn't just a PR company for good causes, it's more of a moral crusade. They burn with passion for clients and bring civic advocacy and real campaigning zeal. It's been hard through the recession, but on the evidence of work they've done for the Manchester Electric Car Company they have grasped the commercial nettle very effectively.

So, to come back to Gore Vidal's silly quote. Honestly, once in a while you look at one of your friends in a confident and happy place and you just glow. Today was one of those days. And here's a better Vidal quote: "Style is knowing who you are, what you want to say and not giving a damn." Touche, comrade?
Posted by Michael Taylor at 9:40 pm

Were you in the Dem Left or SSiN?

Not really "in" either but leaned more to SSiN in firstyear and DL "New Labour" by third. Me and Steve were both Marxism Today readers.

So you'll know Dave Brennan, Conor Foley and the rest.

Yes, I remember them. Nick Hayward too. After Haircut 100 obviously.