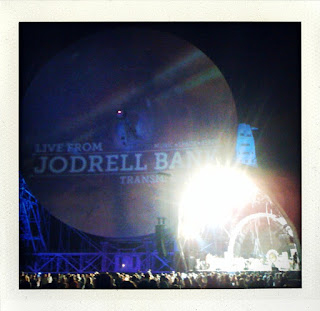 Jodrell Bank isn't a total stranger to music events - the site has previously played host to a one-off performance from Doves, while Professor Brian Cox's D:REAM 'partied up the world' on the Lovell telescope way back in 1995 - but 'Transmission 001 - Live from Jodrell Bank' is the first time a mini-festival has been held at the Cheshire observatory.

The idea of Transmission is to connect the work of Jodrell Bank with new audiences - attract fans for an evening of music, but allow them to take part in space research workshops and access the new £3.5m visitor centre during the day.

Of course it's also a way of generating extra funds to help pay for the site's running costs, given the shrinking public revenue streams available, and it cashes in on the growing trend for bands to play novel venues.

The Forestry Commission has held music events at Cheshire's Delamere Forest for a number of years now, with Erasure, The Courteeners and Simple Minds on the bill this year, but Transmission's line-up was arguably the more exciting of the two.

The Flaming Lips were the main draw although support acts British Sea Power, OK Go, Wave Pictures and Alice Gold ensured the event attracted a diverse mix of people. It was an inspired choice by the organisers to get Wayne Coyne's Oklahoma psychedelic rockers to head the bill, as songs like 'What Is The Light?' and 'Observer' provided the perfect soundtrack for a gig in the shadow of the Lovell, whose dish also doubled as a huge projection screen.

And whether it's through giant balloons, confetti cannons or fancy-dress costumes, Coyne managed to elicit feelings of joy, positivity and love from the 5,000-strong crowd that is rarely present with other bands. It was hard not to bounce around with child-like glee as you were being showered with confetti, especially during 'Do You Realize?', the big sing-a-long of the night.

The event wasn't without its teething problems - taking more than one-and-a-half hours to exit the site's car park took some of the sheen off the night - but from a music and science-engagement perspective, it was a triumph.

As Coyne said: "To stand hear in the symbolic shadow of this great a achievement, I think this is the best place to be on planet earth right now, tonight, right here." I'm not sure there's many people who attended that would disagree.
Posted by Michael Taylor at 2:39 pm