An outstanding Freshwalks hike up Kinder Scout and Edale 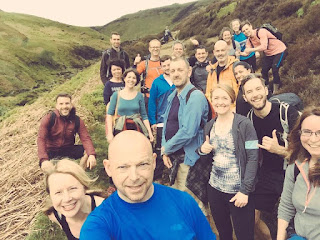 I've done a fair bit of walking in the Lake District, but all the toughest walks I've done have been in the Peaks. Even the names sound daunting - The Dark Peak, Bleaklow and Black Hill. This Saturday the Freshwalks tour did the Edale Circle, a good 16km in some fairly hostile conditions. It was at times unbearably hard. As a symbolic celebration of completing Jacob's Ladder, I slipped onto my arse.

I took the potentially irresponsible option of taking my 14 year old son. I am sufficiently worried that he doesn't get enough exercise and that he needs to find more things that he's good at, and that get him out of the house. And I thought he'd like it. For large parts of it he really didn't, but then none of us really enjoyed the lashing wind, the swirling rain or the hazards of the marshy bogs of Kinder Scout.

It was like the Revenant, without the bear, but no less harsh.

I'm no expert on building personal resilience in kids. I try my best. God knows I was hardly brought up in a favella myself and didn't want for much. And I worried that this was a step too far. But there was also a profound sense of euphoria and excitement when we yomped up the last hill before a smooth descent into Edale.

A word too on the company. I was involved in the very first "netwalking" expedition that has now developed into the hugely successful Freshwalks, led by my pal Michael Di Paola. Timing has conspired against me joining further expeditions, but it is clear that something truly special has been created here. The levels of support and friendliness are astounding. The kindness so front and centre.

As I cuddled up to Matt on the train heading home, trying to congratulate him on an awesome personal achievement, he just looked relieved. While I was trying to understand the mix of teenage hormones, his own unique characteristics that I can never truly comprehend but will never stop loving him for, I swear I had something in my eye.
Posted by Michael Taylor at 9:34 pm