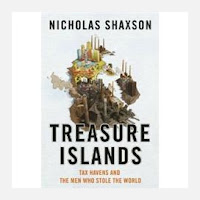 I bought this book by way of preparation for a trip to the Isle of Man. I was interviewing government officials, tax experts, lawyers and business people who chose to operate in a low tax environment. The book doesn't really talk much about the "tax haven in the Irish Sea" but does get stuck into the morality of low tax regimes in Jersey, the Cayman Islands and Switzerland. And the City of London.
Shaxson is to be commended for a well researched and powerfully argued polemic against the offshore financial system. The history lesson is remarkable. He analyses the paradoxes of Maynard Keynes and the role of the Vestey family, a Scouse meat trading dynasty. He describes how companies operating across national jurisdictions fiddle the system by opting to be taxed in low or zero rated countries. When he describes the plundering of Africa it is a powerful tale indeed.
Where he slightly falls down is in his central thesis that offshore is at the root of all evil. When it's his life's work, he sees the tentacles of offshore banking and tax everywhere, even infecting the libel laws. I think he goes way over the top in characterising a layer of idiots in Jersey as evidence that these are all "bad guys". They might be, but he doesn't resort to that crude characterisation in the chapter on the City of London, where the evidence stacks up much better.
So, did it help me in understanding the Isle of Man? No, on the contrary. I have an instinctive hostility to offshore. It doesn't feel right. But the model of a low tax small state anything goes society isn't the case at all. The Isle of Man actually has a larger public sector and a state that meddles in all kinds of odd areas of life. Their argument for a low tax regime is that they have 80,000 people to support and a have higher costs due to their isolation.
And did it help me understand the source of the financial crisis and the problems that face the world? Yes, definitely. It's provided some uncomfortable and unconvenient truths to ponder. And is likely to provoke some soul searching over a number of fundamental business issues.
So, is it a good book? Yes, it's well written and detailed. You also get the sense there is a whole lot more he could say, but is fearful of libel writs. A welcome contribution.
Posted by Michael Taylor at 8:11 pm