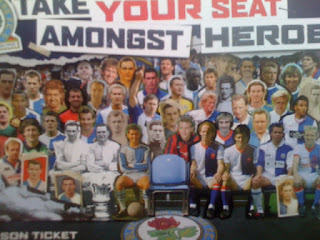 I feel pretty miffed about Phil Jones leaving Blackburn Rovers for Manchester United. It's not just because I happen to rate him very highly and that our sons are going to bed very sad tonight. That is true, by the way, but I'm annoyed because Rovers haven't had enough from him yet. He played 40 games. That's a season. One season.

I'm also miffed because he had an injury last season and was helped back from it. We even went to watch him play half a game for the reserves on his comeback. Surely another season to push forward with the club he supported as a kid - see how they trot that one out when it suits them - would not only have increased his stock as a player but he would have improved his experience and added to the number of appearances too. I don't give a stuff for his career now, or how he does for that other team, I liked him because he played for my team in the blue and white.

No, what really, really gets me, is that there doesn't seem to be anyone able to stand up for the club or to make a case for the future and for a young talent to be part of something exciting. The manager is in court on a drink driving charge. The owners are in India. The managing director has left. There is no chairman. There is only chaos.

And the season ticket packs arrived today with a Manchester postmark and from an Eccles address. Guess who's on the montage of "heroes"? Well, the worst manager the club has ever had is gurning from the back, then there is young Jones, just to the right of Terry Gennoe (289 appearances). Sorry Phil, you will never be a Blackburn Rovers hero. Not now. Your loss.
Posted by Michael Taylor at 9:54 pm

Some very baffling choices in the "wall of legends". Some even more baffling omissions. Spot on with the comments about Phil Jones. I realise now how naive I was believing all the "I love Rovers" nonsense. Lost all respect I had for him.

Being a hero at this club means nothing to Jones. If it did he would not be joining Man Utd. The club Jack Walker hated.

If its the final insult to anyone Jack is at the top of the list. Personally I've had enough of being stabbed in the back.

"Well, the worst manager the club has ever had is gurning from the back" - maybe he could be pushed into second place by Jim Iley?
I agree with your synopsis tho - 'Capitalism is Killing Football' - new T-shirt anyone?