Helping the Heroes at the Reebok 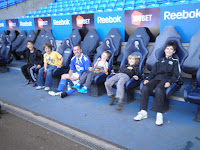 Thanks to my pal Mike Finnigan I had the opportunity this week to play football on the hallowed turf of Bolton's Reebok Stadium. It was a terrific occasion. Finn used to work with Sam Allardyce at Bolton (story here) and organised the fine details - Bolton kits, home and away dressing rooms, UEFA handshakes, music, an official greeting with the Duchess of Grimsargh. As we stepped out to play we all got the same handshake from our boss that his client David Moyes gives his players at Everton - and the same message: "look after each other out there".

The pitch was in great condition. It was like a snooker table, so smooth and the grass was at a perfect length. It was almost impossible to make a bad pass, but I'm sure we did. In time we'll have the video and some photos. There were 8 camera positions and Gary Weaver was doing the commentary. It was great having Rachel and all the lads there to watch too (above). Such a great day.

Last year I played at Ewood Park and it nearly killed me. My fitness and motivation levels must have improved ten fold, as I came through OK and had more pitch time than I did last year. The engine splutters a bit, but I didn't collapse. No-one else got badly injured either, just one lad had a bust hamstring.

We also raised some money for Help for Heroes. This is an important charity in our family. My Uncle Pete, who died in March this year, was an enthusiastic supporter. He was ex-forces and his son Danny is serving too. Pete will never be forgotten, a big guy with a loving family who miss him terribly. This was for him.
Posted by Michael Taylor at 10:27 am