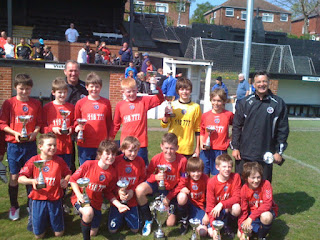 The eldest son's Marple Athletic team won a cup final today. It was a terrific game played at Mossley AFC's Seel Park against Stalybridge Celtic Juniors who have led the league all season. A swirling wind made the conditions difficult, on top of the extra effort required of 12 year old lads playing on a full size pitch.

Watching them every week I get used to the players, their limits, their capabilities and their team dynamics. It was fascinating to get a perspective from my pal Steven Lindsay who came along to watch. I think he expected hoofball, but he was full of praise for the way both teams pass the ball, control and try and play the beautiful game. It's a cup final, so there were tense and nervous moments, but it genuinely warmed the heart to see this game.
Posted by Michael Taylor at 7:01 pm

I did indeed expect hoofball - possibly as much from years watching Scottish football! it was a genuine pleasure to watch as you say. he will remember the day always - and so will your lad!