The Way We Wore by Robert Elms reviewed 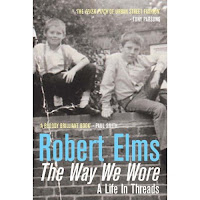 Everyone seems to be so mean about Robert Elms. This is how Chris Morris managed to rip into him on the outstandingly funny episode of Brasseye when starting his Zeit Guest interview with Darcus Howe:

CM: “I’m sitting opposite a man, he knows nothing, he talks all the time, the result is he’s a trenchant buffoon, he had no idea how to present television shows, he looks ridiculous in that fashion wear. He swans around all the time hoping that people will recognise him, when infact nobody’s even remotely interested. He’s taken up enough time on this show already and he hasn’t even opened his mouth. God knows why he’s here, I’ve nothing to ask the guy. And for all I know he may be a coco shunter too.
DH: “What’s a coco shunter?”
CM: “Coco Shunter? That’s just what I’ve got, er, oh, sorry, that’s the introduction to Robert Elms. Sorry. Do you know Robert Elms? I’ve just read out the introduction to Robert Elms."

So, you kind of start with that thought in mind. And the memory of him sneering at "Northern Scum" on The Tube in, oh, I don't know, about 1985.

For all of that, I liked this book. I found it in Marple library and wasn't even aware he'd done it to be honest. I'd read his novel - In Search of the Crack - and it was alright. Very of its time and clearly written in an age and place he knew quite well. For someone who the default mechanism is to immediately dislike, he writes in a very self-depracating way. He tacitly admits he used to be a bit of an arse. In an era when the world is stuffed full of media rentaquotes and all round arses, he was ahead of his time in so many ways.

The tales of various fashion developments in London are fascinating.- a sort of social history. The inside story of the DIY nature of punk and the evolution of male narcissism are rarely told this well. His mate Tony Parsons did him the favour of calling it a "Fever Pitch of Fashion", which looked good on the cover, and it's true in the sense the book is a self-conscious narrative with Elms at the centre of it.

But I wonder if Elms maybe has another book in him. As a radio broadcaster and a journalist with a supposed interest in the world he's inhabited he could bring a lot more to bear on the movements and street styles that passed him by - casual, rave, new casual. Anyway if he won't, I know a man who just might.
Posted by Michael Taylor at 9:49 pm