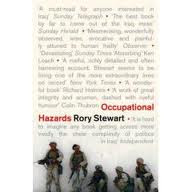 This is a terrific book. A real eye-opener and quite a unique portrayal of Iraqi in the immediate aftermath of the invasion. Rory Stewart was a deputy governor of two provinces and found it hard work. His biggest challenges were the anger and distrust of the locals. The coalition officials never quite got their heads around the fact they weren't greeted as liberators. Despite his well meaning interventions, in the teeth of corruption and hostility, Stewart was never accepted by the people he was trying to help. Were Saddam to have been ousted by a coup, or a civil war, or invasion of the provinces of Maysan and Basra by Iran then there is every possibility the outcome would have been bloodier and nastier. But that is supposition, the fact of the cock-up by the US Army and the Coalition Provisional Authority (CPA) is not.

Now a Conservative MP for Penrith, he maintains warmth, humanity and good humour throughout, which he's finding he'll need in politics. My favourite passages were his account of the siege of Nasiriyah and his dealings with the preposterous Italians. But there were lighter moments too, such as the special forces stakeout of a disused factory, frequented by small groups of furtive men in the dead of night. An Al Qaeda bomb factory? No, a secret location for gay sex.

In the week that we've seen US combat troops leaving Iraq and rather tastlessly whooping that they've "brought democracy" to the country, it serves to remind you how much has changed since Stewart's account, but also how little. His major conclusion is that peace can only come to such a troubled land when western forces leave and let Iraqis, for all their baffling differences and bitter rivalries, to get on with it themselves. Let's hope so.
Posted by Michael Taylor at 7:26 pm

The sight of one US soldier claiming "We've won" was particularly sickening.