It's Not What You Think by Chris Evans, reviewed 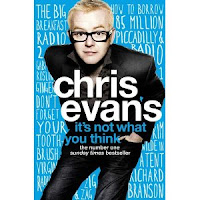 About ten years ago I read a nasty hatchet job about Chris Evans. My anonymous One Star Amazon review is still there.

But here are ten things I learnt from Evans' own book - It's Not What You Think.

1. If you want to write a BEST SELLING book then write it so it will be accessible to people who don't normally read books. Make it lite, easy, full of celebrity anecdotes and LOTS OF TOP TEN LISTS!!!!

2. He's made his peace with his daughter, who he didn't have anything to do with for most of her life. I was genuinely wondering about that. There have been some withering tabloid splashes about that over the years.

3. He admits he was a bit of a tosser for large periods of his life.

4. The book ends before his marriage to Billie Piper and just as he's about to buy Virgin Radio.

5. In his quest to be a GREAT GUY he doesn't name people who took over from him - Mark and Lard, people who come across badly in anecdotes - Dave Lee Travis, or even old friends.

7. TV people don't half fanny about. In entertainment TV every effort has to be directed towards making the presenter look brilliant - anything that doesn't is dealt with ruthlessly. You just know he reduced dozens of people to tears.

8. Danny Baker is a genius.

9. Commercial radio has been destroyed by the advertising sales people.