The sweetest victory of all - Rovers v QPR 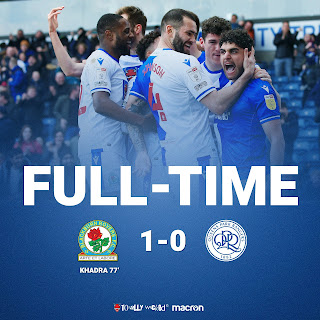 That was the sweetest victory of all. A victory for the true believers. For all those who kept the faith through the toughest of times.

For the best of times this season previous wins have been grafted on that defence, granted, but it has been the intelligence of John Buckley, Joe Rothwell’s ability to spring a surprise, and of course the goals of Ben Brereton Diaz that have propelled this side to the unimaginable heights. A recent barren patch has missed, in particular, those goals of Diaz, though frankly a bounce off Scott Wharton’s backside would suffice.

So to win against a fellow contender with those key elements missing, on the back of a head messing week for Reda Khadra, is what had me reaching for my professional lexicon of memorable great political acceptance speeches of the twentieth century, and why it was so so sweet.

Not only did Khadra have better chances to score today, he won’t have needed reminding by Sky TV, but he was anyway, that he’d also missed a penalty in front of their cursed cameras on Wednesday night at Bramhall Lane; whilst only picking himself out of the blood and spit of a potential career-ending assault from a flashing Blade.

I can't claim to understand the psychology of a substitution, but when I saw Ryan Hedges stripping off I assumed that was the Brighton loanee done for the day. I suspect, so did he. When he saw Sam Gallagher's number up, he must have thought, cheers gaffer, I won't let you down.

Given my early judgements on players in this squad, after Fulham I said Jean Paul van Hecke should be sent straight back to Brighton, what I have to say about the two new Ryans probably doesn't count for much. It's not their fault that they bring to my mind a couple of tricky players in the first team of a post-92 university, with distracting thoughts of a stretched deadline on an economics essay.

On 55 minutes, with Ryan Nyambe on a stretcher, I thought it was another curse of our club. A season going to pot. We all hope it isn't as serious as it looks.

It seems trite, with careers at stake, to think so immediately of the qualities of his replacement, but I may have to admit I was as wrong about Zeefuik as I was about our other flying Dutchman. He plays like one of life's true eccentrics, a tackling style and a quickness of thought that must make him a nightmare to play against.

Which brings me to the one player in this side who I would absolutely despise if he played for any other team. Lewis Travis brings true grit and devilment. I have zero confidence in his ability to not get that painful ninth booking which will trigger a ban but his pulling of the strings today was a thing to behold.

Finally, a word on the deserved Man of the Match. I don't know what it is about this kid, but Tyrhys Dolan brings a lump to my throat. His pointing to the sky for his friend, his willingness to get stuck in, his bag of tricks, his zest to play. We are very lucky to have him.

I said on Twitter on Wednesday after the lamentation at the lane that I hate football. There are other things going on in the world right now more worthy of such emotions, so I was so quickly over it. But for everything Tony Mowbray has been saying about this rather special set of players, I fell right back in love. Fickle, I know, but how sweet it is.
Posted by Marpleleaf at 7:31 pm