Belfast, Branagh and the power of a great movie soundtrack 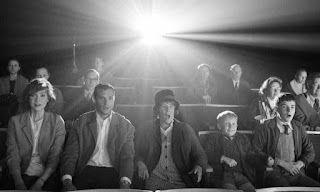 Last week on our radio show I properly overdosed on Kenneth Branagh’s Oscar-nominated film Belfast.  There are legions of reasons why I loved it.

There were the heart-warming moments of innocence as a grim time in our recent history was told through the eyes of Buddy, a really sound 9-year old kid, played with such grace by Jude Hill.

It reminded me of Hope and Glory, John Boorman’s 1987 film about the home front of the second world war, and Empire of the Sun, another child’s eye view of the fall of Shanghai.

Belfast created a similar vibe, through the black and white styling in Branagh’s directing, and in the peerless acting performances from young and old alike. Dame Judi Dench and Ciaran Hinds deservedly have Oscar nominations.

Then there was the music. Most of the atmosphere was created through clever inclusions of a clutch of fantastic Van Morrison songs throughout the film.

But there are also songs which tell a story all of their own about Buddy’s favourite shows on the small television he watched space films and westerns, notably Tex Ritter’s High Noon and Real Love by Ruby Murray, who I had forgotten was a significant musical presence as well as being rhyming slang for a curry.

One scene, in particular, captured the deep love within the family, when Pa (the ludicrously handsome Jamie Dornan) sings the sixties banger Everlasting Love to Ma (the outrageously striking Caitriona Balfe).

That song has been used in a film before, Jamie Cullum’s version popped up in Bridget Jones Diary. Let’s just say it didn’t have the same impact as the original version used in Belfast by yet another of those sixties British pop music underachievers, Love Affair.

On our show recently we were discussing the best film soundtracks of all time.

Quentin Tarantino routinely pulls together amazing collections which always went down in the 1990s in the golden age of CDs. Pulp Fiction, Kill Bill and Jackie Brown soundtracks are amongst the best.

Similarly, David Lynch films are as much about aura as what your eyes see before you. Blue Velvet, Twin Peaks and Lost Highway are incredibly rich in a powerful musical.

Neil is clear there is no film with a better Official Soundtrack than Martin Scorcese's 1998 epic Casino. Spanning generations it places the audience slap bang in the decadent seventies of Roxy Music, Fleetwood Mac and the Moody Blues, but also with a rhythmic nod to the greats of jazz, blues and soul.

To ram home the point, this weekend’s show will open with a tune from the very best film music composer of all time was Enrico Morricone, who became best known for the musical score to spaghetti western The Good, the Bad and the Ugly, but who’s long life achieved hit after hit and legendary status. In 2007, a tribute album We All Love Ennio Morricone featured performances by artists as diverse as Andrea Bocelli, Celine Dion, Bruce Springsteen and Metallica.

After that I’ve also got Jimmy Cliff’s The Harder They Come to share with you, a song so closely associated with a film it’s not clear which came first.

(column from the Tameside Reporter and Glossop Chronicle).

Posted by Marpleleaf at 8:09 am