I've never been to a music festival 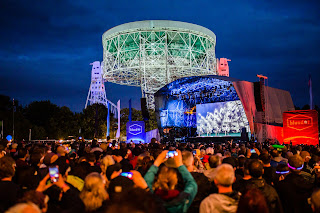 Do you want to know a secret? I’ve never been to a festival.
I’ve been to mega raves, super clubs, dingy gigs in smoky rooms, stadiums, arenas and even the Witchwood in Ashton.
But never to a festival. The closest was a very muddy Milton Keynes Bowl in 1985 to see U2 headline a mega day of music that included REM, The Ramones, Spear of Destiny and Billy Bragg. It was great, but very, very wet and featured the one thing that has put me off ever going to a festival - awful toilets, and then the inevitable consequence of that, flying bottles of wee.
Ever since, whenever I’ve looked at the line-ups of a festival I think of what  the facilities and food will be like. I used to think that the handy festival guides in weekend newspapers should have had a graphic icon with a flying bottle of urine on, to denote whether it was somewhere that this was likely to happen. I understand why festival organisers wouldn’t support that.
I didn’t even go to a festival I could literally walk home to, the annual Moovin Festival in Compstall which to be fair looks very good.
Lots of people my age say they want to try and get to Glastonbury at least once. Good luck with that. The waiting list is enormous and the scramble for tickets is an absolute bunfight. But if you’re nice to Thomas in Brenda Warrington’s office at the Town Hall in Dukinfield, he always seems to get a sniff of tickets.
So this summer, I’ve found two absolute corkers to lose my festival cherry at.
One, Kite Festival in Oxfordshire is billed as a festival of music and ideas. As much as I’m looking forward to dancing to Saint Etienne and Grace Jones, I’m also quite excited about talks by David Miliband and Delia Smith (let’s be having you!).
It will certainly be a new experience sleeping in a hired camper van for a couple of nights and obviously a lot depends on the English weather.
The other, Bluedot Festival, is closer to home, just down the road at the atmospheric setting of Jodrell Bank Observatory in Cheshire on the third weekend in July.
It’s literally the Music Therapy set list in live form. Headlining Sunday evening with a UK Festival Exclusive and uniquely commissioned performance alongside Manchester’s famed Halle Orchestra is international superstar Björk.
Legendary Scottish post-rockers Mogwai will headline Saturday night alongside Indie-electro giants, Metronomy whilst one of the best-loved dance acts, Groove Armada will close Friday night.
The stellar line-up also sees Spiritualized, Yard Act, Working Mens Club, A Certain Ratio, Tim Burgess, Squarepusher and Anna Meredith amongst many more acts.
There’s even an appearance in the spoken word tent of so-called comedian Stewart Lee, talking about his music documentary film King Rocker.
I’ve really had my love of music rekindled over the last couple of years, since we’ve been producing Music Therapy for you, and so the efforts of people in the music business to put on very special shows like this is more welcome than ever.
And it’s just a hunch, but I don’t think I’ll need to worry about flying bottles with this crowd.
(column from the Tameside Reporter / Glossop Chronicle, 11 February 2022)
Posted by Marpleleaf at 2:10 pm