What's the use in complaining? Rovers 1, Preston 0 in the Lancashire derby lite 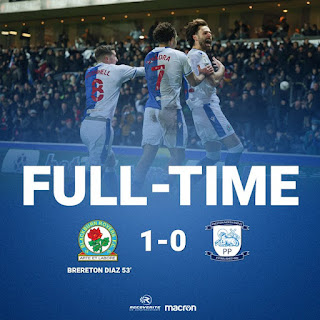 We only have so many outlets to express our discontent as football fans. Not that beating Preston North End 1-0 at home gives me any cause to be angry. It really doesn't, I always enjoy a win in a local derby, even if it isn't really the full-fat version that may be about to return.

It doesn't mean I'm entirely happy though. Football is essentially a pastime where uniquely once we opt to partake in it, we are individually powerless yet collectively threatening. It's not like any other area of life where substandard aspects of the experience offer the possibility of redress. Let's cut to the chase. I was unable to get a pie before the match because they'd run out on the Riverside entrance, and the tills weren't working and the staff walked out in the one on the top of the stand, in the 15 minutes before kick-off. It's not an option to wait or go elsewhere. And these things are pretty critical to the whole matchday experience, even though I could go to Morrisons right now and buy the same pie for about a third of the price. That's a matchday experience, by the way, that Steve Waggott, the chief executive of Blackburn Rovers (salary £180k) valued at £30 a head today. He may be right that demand was high enough to justify charging that to walk-on home fans and for the 3000 visitors from Preston. Indeed they will have paid half his annual salary in one afternoon. But I can't help but feel, as my good friend Ian Herbert put it, that just because you can, it doesn't mean you should.

You might also think that as well as hiring and training the poorly paid catering temps, Waggott may have some responsibility for the groundstaff. Puddles of water made the game a tough watch in the first half, which rather suggests a pitch that lacks drainage and staff unable to fork enough holes before the game and at halftime. In the first half, Preston looked like they'd played on wet pitches before. Rovers looked for all the world like the Mauritanian badminton doubles team learning a new sport.

I don't know. I know nothing of maintaining grass pitches and team tactics.

I've raised 5 kids though. I think I've done OK. One thing I learnt is that when they were hungry, tired and upset, garnishing them with too much attention is probably the wrong thing to do. We also learnt that when they had run-ins with supply teachers, to let it go. The referee today, Gavin Ward of Surrey, displays all the control and charisma of a struggling stand-in, who learns all the worst lessons in lesson management, crowd control and dissipating authority by making literally even worse decisions. I am saying this today because we won. And I also think he got a bad call wrong that could have earned Preston a penalty. But it shouldn't be about him, though somehow, it always is. Who do I tell about this? Who do I write to? Why is he refereeing professional football matches and who says he can do so again?

As an example of a fruitless protest a Preston supporter unfurled a bedsheet at full time with 'Frankie Must Go' on it. Unfurling bedsheets demanding hapless Scottish managers be sacked used to be popular in these parts, and to be fair I have observed that Frankie McAvoy, the North End boss, gives off Steve Kean vibes. But even that half-hearted howl took some foresight given that a week ago North End earned a draw against a team that recently beat Blackburn Rovers 7-0.

I'll take that today. I'll take the 1-0, the winning ugly, on a day when players of real artistry were quite literally stuck in the mud. Joe Rothwell and John Buckley will have better days. Though Rothwell may have more like that if he foolishly opts to play in the Scottish Premier League, as is rumoured.  It was a day for Darragh Lenihan, a day for Lewis Travis, both of whom got fouled without redress and booked without justification. I also observed it was possibly a day for a clever player like Bradley Dack. His return is getting closer. He will bring an intelligence and a versatility to a team that is beginning to frighten me. At Stoke last week, and today, I was concerned that Reda Khadra doesn't do enough to justify playing ahead of the incredibly gifted and energetic Tyrhys Dolan. But he only needs one moment of magic to turn a game, and his cross to a Sheareresque leap from Ben Brereton Diaz was enough. And I've got absolutely no complaints about that whatsoever.

Posted by Marpleleaf at 8:28 pm