Lasting Legacy of The Beatles 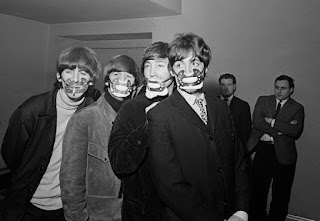 We were out in Liverpool last Friday and were reminded once again of the absolute enduring power of the Beatles.

We walked past two different bars where live musicians were performing. And yes, one of them was knocking out a passable version of Yesterday.

When I was younger I used to roll my eyes a bit at what I thought was a mawkish and nostalgic attitude towards the Beatles from our scouse cousins. If anything that attitude was just so typically English.

It’s 20 years last Monday since George Harrison died. And next Wednesday the 8th of December it will be 41 years since John Lennon was killed in New York.

I think the time, the distances between their passing and the ever-growing appreciation of Paul McCartney’s more recent output has given us a reminder that we need to cherish their memories a little more.

So much of their appeal in America was their humour. And the picture above of them in masks on a visit to Manchester is a bit of gentle ribbing about air quality down this end of the East Lancs Road.

Paul McCartney has a book out about his songs, the Lyrics, 1956 to the present. It sounds like a Beatles’ geek’s dream, including accounts of all of the songs he’s ever written, what he was thinking at the time, who he was with, what they were about, and what he thinks of them now.

I’ve also recently discovered a podcast series where different people basically talk about their own personal experiences and how the Beatles have shaped their own thoughts, lives and experiences. It sounds like it shouldn’t work, but it does. The last one I listened to was with the comedian Adam Buxton and it is just sublime.

A writer I follow called Ian Leslie has been commissioned to write a book about John and Paul. He mentioned them in a very good book he released earlier this year called Conflicted - Why Arguments Are Tearing Us Apart And How They Can Bring Us Together. You can see why he’d want to look closer at the dynamic behind the greatest songwriting partnership of all time.

He made the point in another long article about The Beatles recently that no single individual in the history of humankind has brought as much pleasure to so many people as Paul McCartney.

On our show last week we opened with All My Loving, the first song played by The Beatles on the Ed Sullivan Show in America in 1964. It started the lasting love affair that the rest of the world had with them.

But the project that has got everyone excited has been the work of the film director Peter Jackson who has delved into the archives and released a three-part epic documentary film Get Back. It's presented in a proper fly-on-the-wall style, the encounters in the studio and the everyday mundane business of making a record are captured in beautiful celluloid glory.

Everyone I’ve spoken to who’s seen it describes it as time travel. More remarkable than this was a far less media-savvy group of people than they would be today, so are in a much more natural and relaxed mood.

How a band so creatively prolific, commercially successful and capable of bringing so much to so many people could be overindulged was frankly ridiculous.

So, if anything, Liverpool hasn’t done enough to celebrate them.

Posted by Marpleleaf at 9:35 am