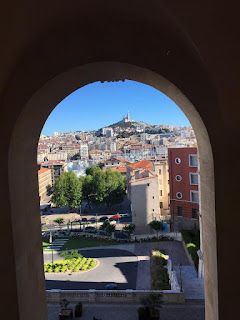 We had a tremendous time in Marseille. It all came about after meeting a lovely French bloke who worked in the hotels world. We wanted to go away in early June to somewhere neither of us had been before. He recommended Hotel Dieu in Marseille. What a glorious surprise the whole city was. As a port city you expect a certain grit, but it was nothing like as rough as I feared. In many ways it felt like somewhere that is changing and modernising, while trying hard to preserve its edge, without having the swish elan of Nice and Cannes, which I've been to many times before.

We took in the sights on the first day - Notre Dam, the harbour, Mucem. Then we headed for the small coastal town of Cassis on day two.

Getting around, as it is in so many European cities, was easy and safe.

To quote my favourite film, one ought to have a room with a view on the first visit. As you can see, we certainly had that. But we also treated ourselves to a real quality hotel, way above what we'd normally go for. Poached eggs at breakfast will never be same now we've had them cooked by a Michelin starred chef.

The only disappointment was Boullabaise. We felt obliged to try it, but fish soup is fish soup and wasn't worth the tourist premium we got fleeced with.

We have a few other European cities in our sites for visits soon. Recommendations welcome.