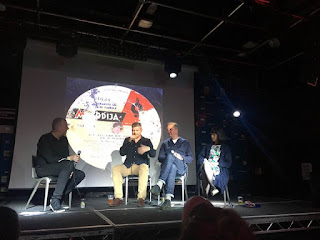 Partly I think it's because I always love listening to Dave when he tells stories. I've probably heard him in this kind of setting more than I've heard him DJ now, which is a testament to his own successful second act - I won't prolong that metaphor, too many have. We also heard about some of the slightly surprising things collected by his guest panellists; poet Tony Walsh, musician/artist Naomi Kashiwagi, and DJ/producer Mark Rae, including a crazy story about a trip to Chernobyl.

The blurb for the event explained how the core of ‘A Life in Thirty-Five Boxes’ is an exploration of our impulse to collect - particularly our emotional attachment to vinyl - and the notion that every record collection reflects our life story. Dave tracks how his own collection built up, how others have fed their obsessive collecting, including the man who tracks down multiple versions of Light My Fire by Jose Feliciano. It takes us all the way to the moment Dave decides to sell all his vinyl to DJ Seth Troxler, and waves goodbye to thirty-five boxes of records as they’re loaded into the back of a van.

He talks a lot about giving up the inheritance his vinyl collection represented - he was going to pass it to his children - but feared the tragedy of it scattering and breaking up. It reminded me of the parable of the rich man getting in to the kingdom of heaven, and it being harder than a camel passing through the eye of a needle. I have always taken that to be less of a denunciation of wealth, more of a statement that you can't take any of it with you, so give it back with love.

As is often the case, the Q+A flushed out some important points. Not least, the triumph of nostalgic revisionism. Dave touched on it in a challenging essay he wrote in 2015, here:

"The city authorities habitually give a nod to Factory Records, but I’m not sure they quite get important parts of the Factory story. The Hacienda wasn’t a disco version of the Trafford Centre. The Factory label, the club, those around and involved – from musicians to video makers – produced culture. It wasn’t an exercise in consuming but creating. In addition, like Shelagh Delaney, not only were they forced into action by despair at the cultural provision of the time, Factory operated outside the margins. One of the richest chapters of Manchester’s cultural history began when the lads who went on to form Joy Division began to meet up in a makeshift rehearsal room above the Black Swan Pub, near Weaste Bus Depot.

Since then I feel the city has become even more of a shallow memorial to the misunderstood past of Madchester. I like to think Dave's writing and his new publishing model is a subtle nod to how to use our past to tick on to the future, but as we walked out there was a poster for another Hacienda night (at Gorilla).
Posted by Michael Taylor at 8:31 am