The need for Change - a political howl 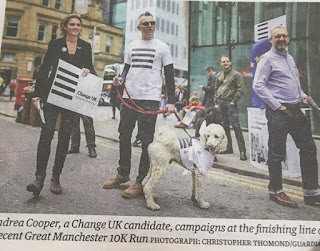 I don't know where we go from here.

I don't know what's going to happen in our broken political system.

What I do know is that the Tories are going to install Boris Johnson as Prime Minister and that Jeremy Corbyn is still the leader of the opposition. That is not an acceptable choice to lead our country.

What I also know is that I have never felt as at home politically as I did amongst the Change UK candidates and activists when I stood in the European election in May. Nor have I felt as inspired. I know we got absolutely creamed at the polls and that the experience wasn’t ultimately what I expected. I’m also disappointed at the swift break up of the parliamentary group, the shambles with the name and I do seriously wonder what can realistically carry on.

Let’s be clear. Those brave MPs who quit Labour over the toxic anti-semitism, the fudge over Brexit and the unpalatable state of the party were right to do so. Nothing has changed. It wasn’t premature to do so, something had to give. It was also disappointing that more didn’t follow. I genuinely don’t know what those MPs and members who oppose Corbyn expect to happen.

Taking it all in good faith, I did my bit and walked towards the sound of the battle. It was the usual rough and tumble, but also I believe we raised the Europe issue on another platform and LibDems and Greens reaped the rewards. Fair play to them, they worked hard for it.

But what happened in the locals and the Euros hasn't changed the mess in Westminster. The next question is what kind of ambitious realignment in the mainstream of politics is possible. If it can happen, then where might the different remnants of Change UK go next? And what kind of berth do the Liberal Democrats represent? The Liberal Democrats need an injection of serious political ambition, not to take a few seats back and to win a few hung councils, but to provide a serious government that isn’t Johnson or Corbyn, which a majority of the British people are horrified by. Maybe that's what Chuka Umunna thinks will happen now. The general in search of his army.

For those that have left, personally, I think it might have been worth waiting to see what the longer view was from a larger body of activists, candidates and the collective group, rather than to act individually, or to just walk away now, but you can’t fault them for acting swiftly and politics is often about the gut feel.

A whole series of blunders contributed to the disappointing campaign and plenty of other people have commented on all of that. Not least the leaked strategy note that seemed to regard the LibDems as an irritating irrelevance, ready for the taking. I’ve always felt they have been key to any new entity, but that culturally they need that injection of ambition and to have the confidence to get over the coalition government experience. My own frustrations with their local opportunism have also betrayed that lack of courage to stand up for what they believe. And yet when they do? Well, the result was clear.

I've reached out to the Liberal Democrats I know personally and have enjoyed some robust and forthright conversations.

But I feel two things at the moment, an urgency to act, and a deeper one not to waste time on a callow gesture. The alternatives just aren’t there. I recognise that a Westminster led group always had a better chance of building something through the centre and taking activists with it. The Renew party has attempted to build from the grass roots and got 45 votes in the Peterborough by-election.

So, it's going to be decision time soon.
Posted by Michael Taylor at 8:21 pm

You are right that there is a desperate need for an alternative to the hard right and hard left who now, in effect, own the two big parties.

This is a national emergency and country should always come before party. Inevitably, there will be a handful of LibDem tribalists who aren't prepared to think through the implications, but should the LibDems fail to allow that alternative to emerge, the outlook for our country is grim.

Before May, I'd have been in favour of some kind of Alliance, though I'd have wanted merger as soon as possible - because from my experience of the 1980s an Alliance would create all sorts of serious problems of its own.

But I think, following the May elections, it's not realistic. Nor do I think an Alliance with the Greens is realistic. They tend to be much nicer people than the group around Corbyn, but I fear, if their policies ever got close inspection, anyone associated with them would be severely damaged in the backlash.

I feel the only alternative is the LibDems. But that doesn't mean LibDem triumphalism. Thousands are joining the party. As they do, each one of them has as much a vote as any other. And steadily, the culture of the party will change.

I think the challenge for those who are dissatisfied with the LibDems is to join it, and change it from within.

If you accept the preamble to our constitution, and I'm sure you do, you'll have as much right to argue your corner as a founder member like me. It's one member one vote, and anyone who thinks the new members don't have a vote is going against a central principle of the party.

Good piece. All parties have a need to reflect. The reality for the Lib Dems these past years has been survival and relevance. People who asked "what's the point of the Lib Dems?" were not being unreasonable.

This year the Lib Dems have found their point and become relevant again. The party must adjust to that - must start talking and acting like a potential party of government.

All parties are tribal. I respect what ChangeUK tried to do and I understand why joining the Lib Dems was not seen as the best route.

Whether the last couple of months changes that calculation is a question individuals must answer.

The Lib Dems need to have the humilty to admit that we don't have all the answers and, like every party, we can benefit from fresh thinking and different perspectives.